The Portland Air National Guard Base (PANGB) in Oregon, US has deployed the quadrupedal uncrewed ground vehicle (QUGV).

Developed by Ghost Robotics, the four-legged droid is also known as a robot dog.

The technology was handed over to the PANGB last December and was looked after by the US Air Force 142nd Security Forces Squadron (SFS).

142nd SFS logistics and resources non-commissioned officer tech sergeant Jamie Cuniff said: “We’re kind of spearheading this whole side of security, this autonomous defender as they say, which makes me feel really good and proud to be in the unit. 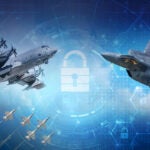 “From a security standpoint, it’s going to benefit us in the way that it provides some real-time video feedback and acts as a deterrent.”

The semi-autonomous robot with canine-like body features a range of capabilities, including a sensor package that provides base security.

Using the technology, the operator can track the perimeter of the base, scan the surrounding with multiple cameras, endure a variety of terrain and travel long distances in one charge.

Among its other capabilities, the droid can provide active surveillance of the area and bring the collected information back safely to the security forces squadron.

The technology can also be manually controlled by interrupting the autonomous function at any time.

The QUGV, which can be awakened by a one-button click, is programmed to decrease human exposure to dangerous situations.

Furthermore, the new technology is expected to enhance the mission effectiveness of the Portland Air National Guard, using its advanced detection capabilities.

According to Barton, the base is also working to acquire two more QUGVs and deploy the three robots to enhance the security of personnel, base and other mission assets.

In January last year, the Ghost Robotics demonstrated its robot dog technology to the airmen at USAF’s Scott Air Force Base in Illinois.