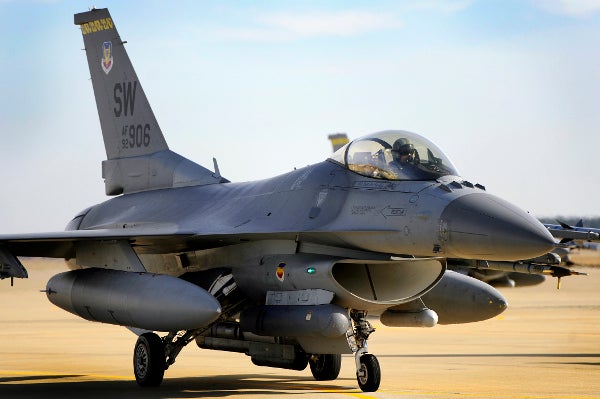 Raytheon Technical Services Company (RTSC) has received a contract to start full-rate production of its centre display unit (CDU) for installation into the cockpit of the US Air Force’s (USAF) F-16 Fighting Falcon aircraft.

Covering production of 100 CDUs, the contract follows its endorsement as the F-16’s primary flight reference (PFR) system by the air force in late 2012.

A requirement in all aircraft, the PFR seeks compulsory provision of airspeed, altitude and attitude data, as well as flight path information to the pilot during combat operations.

"The CDU’s efficient installation — which minimizes aircraft integration, airframe and wiring modifications — demonstrates how we are listening to, and working with, our customers to provide advanced and cost-effective situational awareness products," Lewis added.

Data, insights and analysis delivered to you View all newsletters By the Airforce Technology team Sign up to our newsletters
"Covering production of 100 CDUs, the contract follows its endorsement as the F-16’s primary flight reference (PFR) system."

Raytheon’s CDU provides the pilot with an ability to control and display vital information, including data link messages, video and annotated imagery, from the aircraft to ground forces, enhancing lethality, while also minimising fratricide, aircraft integration, airframe and wiring modifications.

Providing effective navigation of multiple sensor, image and situational awareness displays, hands on throttle and stick (HOTAS) control, the system also supports technology insertion due to its open architecture. The contract amount and delivery schedule has not been disclosed by the company.

Designed initially as an air superiority day fighter, the F-16 Fighting Falcon is a single-engined jet aircraft and later evolved into a successful all-weather multirole aircraft.