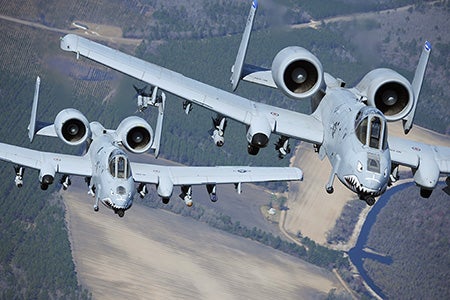 Boeing has been awarded a contract for production of additional replacement wings for the US Air Force’s (USAF) A-10 Thunderbolt II close support aircraft.

Covering production of 56 wings, the $212m order forms part of an approximately $2bn contract secured by the company for production and supply of 242 A-10 replacement-wing sets in June 2007.

The latest contract brings the total number of wings ordered to date by the air force to 173.

Manufactured at the company’s facility in Macon, Georgia, US, the new wings are designed to replace A-10’s existing wings that are nearing the end of their structural and economic service life.

Additionally the new wings are expected to help USAF save an estimated $1.3bn for the next 30 years, while simultaneously enhancing the aircraft’s mission capability by up to 4%.

The outer wing sections are being manufactured by Korean Aerospace Industries (KAI) under a subcontract with Boeing, and are shipped along with support kits to Hill Air Force Base (AFB) in Utah, for installation.

The first A-10 aircraft fitted with the replacement wings were rolled out at Hill AFB in February 2012.

"Deliveries of all wings under the original contract are expected to be completed by 2018."

Deliveries of all wings under the original contract are expected to be completed by 2018.