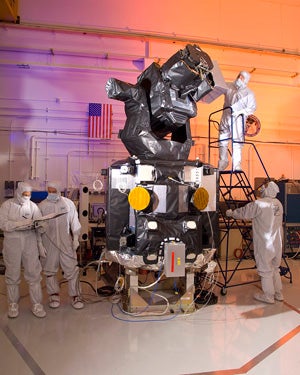 Built by Boeing, the SSBS is the USAF’s only space-based sensor designed to detect and monitor debris and satellites without interference from weather and atmosphere as well as to offer critical information required for supporting warfighter in decision-making.

The satellite is equipped with a visible sensor mounted on a two-axis gimbal, and an onboard reprogrammable image-processing payload and software to help augment mission flexibility and upgrades.

Enhanced detection timeliness is also expected to assist the Joint Space Operations Center (JSpOC) in maintaining precise knowledge of orbiting object positions, tracking new objects and debris, as well as lowering the number of uncorrelated targets that are currently present in the space catalogue.

Boeing secured the SBSS contract in 2004, and partnered with Ball Aerospace to manufacture and supply the first spacecraft along with associated ground segment to the air force.

The satellite was launched aboard an Orbital Sciences Minotaur IV rocket from Vandenberg Air Force Base in September 2010, and initial on-orbit signals were received shortly at the Satellite Operations Center at Schriever Air Force Base in Colorado, US.