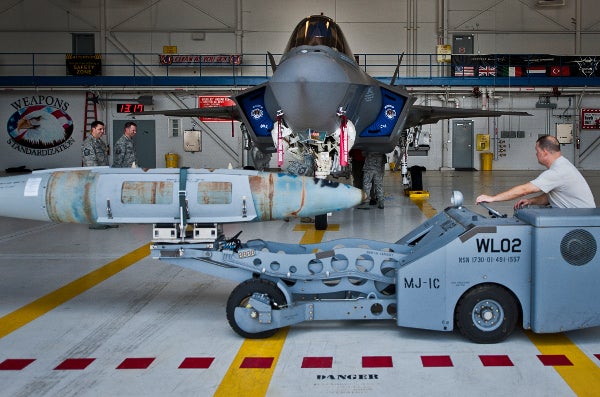 The US Air Force (USAF) has conducted the first munitions load verification on the F-35A Lightning II joint strike fighter (JSF) aircraft at Eglin Air Force Base in Florida, US.

During the verification load exercise, several iterations of loading and unloading of four different munitions were carefully performed.

”This involves loading and unloading laser-guided and GPS-guided bombs, and air-to-air missiles into the weapons bays of the aircraft and ensuring the instructions we provide our load crews are accurate and effective – one more step towards F-35 initial war fighting capability," Huzzard said.

"The move represents the first hands-on load verification for the crew, and follows extensive practice using a series of tabletop exercises for several months."

Air force master sergeant Karen Griffin, who was one of the SLC team who performed the exercise, said, "Getting this step verified in ALIS (the automated logistics information system) for the F-35A is important, so we can move forward and get our 60-plus maintainers trained and working."

The SLC members are scheduled to train the weapon troops, once the procedures are verified.

Currently under development in three versions by Lockheed, the F-35 JSF is a fifth-generation multirole fighter aircraft designed to conduct an array of ground attack, reconnaissance and air defence missions with stealth capability.

Image: 33rd Maintenance Group personnel manoeuvres the guided-bomb-unit-31 into position for loading onto an F-35A aircraft at Eglin Air Force Base in Florida, US. Photo: courtesy of Samuel King Jr.