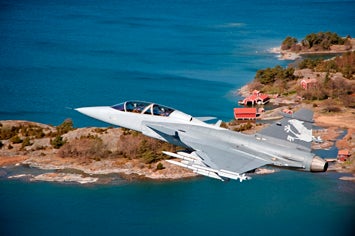 The three-day demonstration was aimed at validating the aircraft’s defence mission profiles with different weapon configurations, including the IRIS-T, METEOR and AMRAAM.

The programme also included simulator training and four test flights of the Gripen E/F aircraft, while the aircraft’s flight performance was tested by simulating an operational air defence mission profile.

Bernhard Berset, Armasuisse chief test pilot, said: "We performed flight performance tests using an air policing scenario. We simulated a quick reaction alert and a maximum performance intercept to high altitude and supersonic speed, and we tested the engine in the entire envelope and are pleased with the results."

The Gripen E/F test aircraft will undergo a fourth phase of testing as part of the programme following the integration of advanced avionics and displays onto the aircraft, which are currently under development.

Richard Ljungberg, Saab chief test pilot, said: "The co-operation between the two teams has been truly fantastic. We conducted four test flights with the Gripen E/F test aircraft, which performed, as ever, perfectly. We have really shown the growing capabilities of this aircraft and we demonstrated everything requested, including increased performance, handling and endurance."

Earlier test phases were intended to validate the aircraft’s flight handling, aerodynamics and performance improvements, which include the new GE F414G engine and increased weapon loads.

The Federal Council selected the Gripen E/F to replace the ageing fleet of Northrop Grumman-built F-5E/F Tiger for the Swiss Air Force in November 2011.

The test flights are part of on-going negotiations between the Swedish government and Saab concerning the optimisation of the procurement process.