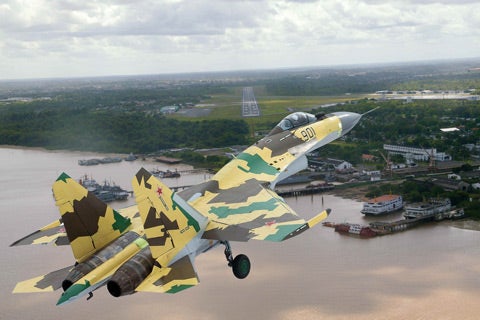 The two-hour testing evaluated the aircraft’s propulsion and integrated control systems at different modes as well as its stability and controllability characteristics, after which the fighter will be handed over to the Russian Defence Ministry. The upgraded Su-35 Flanker-E is a single-seat, fourth-generation multirole fighter powered by two 117S engines with thrust vectoring and is capable of simultaneously engaging several air targets using both guided and unguided missiles and weapon systems.

The aircraft, employing fifth-generation technologies, is equipped with a new avionics suite based on a digital information control system and integrating onboard instrumentation including new radar with a phased antenna array. The radar detects and tracks an increased number of targets, continuing space observation and target engagement.

The highly manoeuvrable aircraft features a range of long, medium and short-range weapons as well as guided aerial munitions for anti-radar and anti-ship operations, and general purpose munitions, guided and unguided aerial bombs. The first and second fighters were delivered to the 929th State Flight Test Center (GLITS) for the State Joint Tests (SJT) last year.

During the preliminary flight tests the aircraft demonstrated a maximum ground-level speed of 1,400km/h with an air-to-air mode target detection range of over 400km, comparatively greater than that of the combat aircraft currently in service. The Russian Defence Ministry plans to acquire 48 units of the fighter aircraft under a $2.5bn deal signed with Sukhoi in 2009.