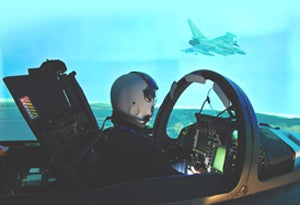 The Spanish Air Force (SPAF) has taken delivery of an additional Eurofighter Typhoon flight simulator from Cassidian, which will be used to train pilots in the aircraft’s missions and functionalities.

Delivered as part of the Aircrew Synthetic Training Aid (ASTA) system, the new simulator is scheduled to be operated by the aircrew of the 14th Wing of the Albacete Air Base.

Two flight simulators have already been installed by the company at the Morón de la Frontera Air Base in Seville, Spain, and have so far completed 6,500 hours of simulation, including 4,800 training sorties.

Cassidian Spain CEO, Pilar Albiac, said the delivery represents a new milestone for both the company and the air force.

The trainer is capable of replicating the aircraft behaviour and its embedded systems with a high-degree of fidelity, supporting trainees from familiarisation with the aircraft to real missions in highly-complex tactical environments.

"The trainer is capable of replicating the aircraft behaviour and its embedded systems with a high-degree of fidelity."

Valued at €1.07bn, the ASTA contract was signed by the Eurofighter Typhoon industrial consortium in April 2001, for the development of a cost-efficient solution that will support the introduction to service and future training requirements of participating air forces’ Typhoon fleets.

The solution is made up of full mission simulators (FMS), which offer an accurate reproduction of the aircraft’s cockpit, and the cockpit trainer / interactive pilot stations – enhanced (CT/IPS-E) system, as well as associated ancillary devices.

Around 19 ASTA systems are currently operational with five Typhoon operators, including Austria, Germany, Italy, Spain and the UK for aircrew training.

Built by a consortium of EADS, Alenia Aeronautica and BAE, Typhoon is a twin-engine, canard-delta wing, multirole fighter designed for deployment during air operations, including air policing, peace support and high-intensity conflict missions.