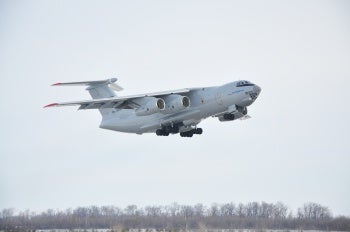 During the four hour and 25 minute test flight, performance of the aircraft’s onboard avionics, engines, automated control system and other characteristics were validated at altitudes of up to 33,000ft, as reported by RIA Novosti.

The prototype aircraft is now scheduled to be shipped to the Zhukovsky flight test centre near Moscow, Russia, for additional field trials.

The aircraft had conducted its initial test flight at the same location in September 2012.

A total of 39 aircraft have been ordered by the Russian Defence Ministry from United Aircraft Corporation (UAC) as part of an approximately RUB140bn ($4.5bn) contract in October 2012.

"The prototype aircraft is now scheduled to be shipped to the Zhukovsky flight test centre near Moscow, Russia."

The contract has been placed as part of the country’s 2011-2020 State Arms procurement programme, which seeks acquisition of 100 such aircraft to help replace the air force’s ageing Ilyushin Il-76 multipurpose aircraft fleet.

Displaying a modernised wing-construction, the aircraft is also capable of transporting up to 50t of cargo, which is 20% greater than its predecessor, while it can also travel at speeds of 850km/h.

The air force is set to receive the first aircraft in 2014, while the deliveries are scheduled to be completed by 2020.