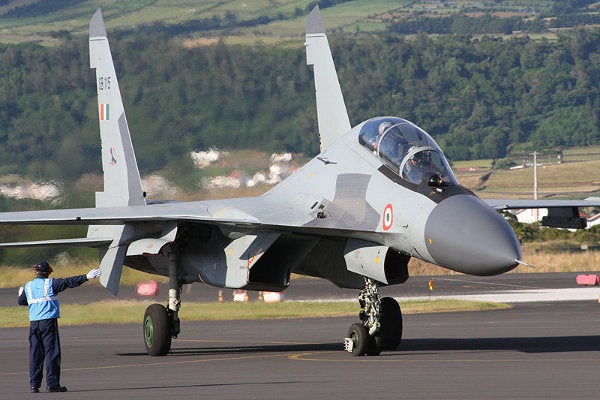 Russia has signed a preliminary deal with India to sell 42 Su-30 MKI frontline jets in kit form and provide technical assistance during their production.

As per the agreement, the jets will be assembled in India by Hindustan Aeronautics Limited (HAL) under a licensed production agreement.

The sale agreement follows India’s rejection of a Russian bid to supply 126 multirole combat aircraft in a $12bn deal.

The multirole, twin-seater, long-range fighter, jointly developed by Russia’s Sukhoi and HAL, provides greater combat agility and manoeuvrability and is also armed with precision anti-surface missiles with a stand-off launch range of 120km.

The additional fighter jets will feature new upgraded cockpit, advanced radar and stealth features to avoid radar detection and will be able to carry a heavier weapons load, including an airborne version of the Brahmos cruise missile.

The aircraft is powered by two AL-37FP thrust-vectoring engines and can be armed with two TV command-guided missiles, such as the Kh-29 (AS-14 Kedge) with a 317kg penetrating warhead and the Zvezda Kh-31A, for attaining long-range anti-surface capability.

The combat range of the aircraft on internal fuel is 3,000km and can be extended to 5,200km with a single in-flight refuelling procedure.

The Indian Air Force (IAF) plans to increase the fleet of Sukhoi Su-30 fighter aircraft to 230 by 2015 and use it as one of its main warplanes, along with 126 medium multirole combat aircraft and indigenous light combat planes.

The UAV Payload Market in Russia to 2025: Market Brief