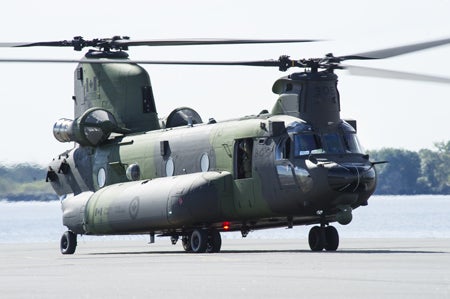 The Royal Canadian Air Force (RCAF) has taken delivery of an additional CH-147F Chinook medium-to-heavy-lift helicopter (MHLH) from Boeing, one month ahead of the original schedule.

Delivered only three months after the arrival of the first aircraft in June, the helicopter represents the fifth of 15 units ordered by the Canadian Department of National Defence (DND), along with in-service support from Boeing in June 2009.

Calling the Canadian Chinook one of the most advanced military cargo helicopters ever delivered to the global market, Boeing International Chinook Programs director and Canada CH-147F programme manager Steve Parker said the company has executed the programme on or ahead of schedule for every major milestone since the contract award.

"These early deliveries are another example of the H-47 team’s dedication to providing this important capability to the RCAF," Parker said.

Boeing is also providing in-service support to the MHLH fleet for the next 20 years under a separate performance-based logistics (PBL) contract, and has sub-contracted six local suppliers for the same.

"The helicopter represents the fifth of 15 units ordered by the Canadian Department of National Defence."

The total cost for acquisition and in-service support for the MHLH project is estimated to be C$5bn ($4.75bn).

Equipped with a critical capability to respond to humanitarian emergencies, including fire, floods and earthquakes, the helicopter also features a directional infrared countermeasures system for the destruction of anti-aircraft missiles.

Boeing is scheduled to hand over two additional helicopters to the RCAF this year, followed by another eight by June 2014.

Image: The fifth CH-147F Chinook helicopter was delivered to the Royal Canadian Air Force one month ahead of schedule. Photo: courtesy of Boeing.