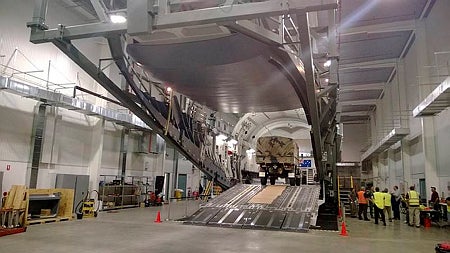 The Royal Australian Air Force (RAAF) has taken delivery of a full-scale C-17 Globemaster III cargo compartment trainer (CCT) from Boeing at its RAAF Base Amberley in Queensland, Australia.

Designed to ensure the cost-effective completion of the air force’s loadmaster training at home, instead of the US, the trainer was commissioned along with delivery during a ceremony at the airbase.

A fully-functional replica of a C-17 fuselage, the CCT is capable of realistically simulating both day and night operating and loading conditions for loadmaster, aeromedical evacuation and aeromedical specialist training scenarios.

Fitted with a cargo bay, functioning loading ramp, loadmaster’s station and other cargo systems found on the real aircraft, the trainer is housed in a purpose-built facility at the air base, and can accommodate payloads ranging from 18 pallets of cargo to helicopters, as well as an M1A1 Abrams main battle tanks.

Air 8000 program director GPCAPT Warren Bishop said the CCT represents the final component of the C-17 programme, which has delivered a substantial capability to Australia.

"It will add significant value to the RAAF, providing the capability to train pilots and loadmasters in Australia."

"It will add significant value to the RAAF, providing the capability to train pilots and loadmasters in Australia," Bishop said.

king said, ”The CCT will train a generation of defence personnel who will continue to use the C-17A to improve the wellbeing of others within the region..

”Conducting engineering assessments on the CCT and away from the real aircraft will effectively allow us to more easily clear loads for carriage.”

The CCT will be maintained by L-3 Communications, which is under contract to provide continued training for RAAF C-17A personnel.