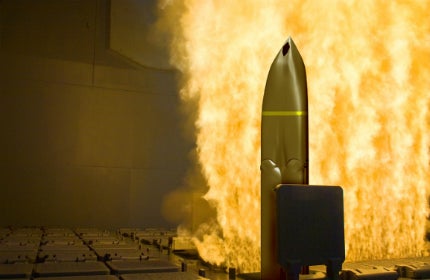 Lockheed Martin has carried out a series of captive carry flight tests of the long-range anti-ship missile (LRASM) at the Point Mugu Sea Range in California, US.

Conducted on a US Air Force’s (USAF) B-1B bomber aircraft, the test flights move the missile, which is currently being developed to address both the US navy and air force requirements, towards its first release and free flight testing in late 2013.

The test flight was primarily aimed at collection of telemetry for post-flight analysis, proper control room telemetry displays verification, and simulation of all the test activities that will occur in upcoming air-launched flight tests.

Manufactured by Lockheed in collaboration with the US Defense Advanced Research Projects Agency (DARPA) and the US Office of Naval Research (ONR), the missile is expected to be equipped with advanced countermeasures to effectively evade hostile active defence systems.

The LRASM missile is expected to enter into serial production in 2015.

Image: An impression of the vertical launch of the long-range anti-ship missile. Photo: file image.