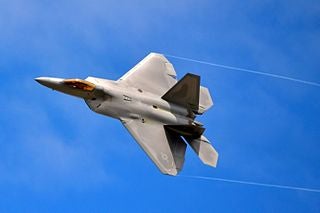 Since being declared operational in December 2005, the fighter has been frequently grounded over safety concerns relating to its oxygen system and has not been deployed for combat operations in Iraq, Afghanistan or in the US-led no-fly mission over Libya.

The USAF was originally scheduled to order 400 fighters, but the plan was later cancelled by the US (DoD), which reduced the number to 187 to help save funds for other programmes.

"Since being declared operational in December 2005, the fighter has been frequently grounded over safety concerns."

Designed to conduct air-to-air and air-to-ground combat missions with stealth technology, the aircraft can also be configured to perform a range of operations, such as ground attack, electronic warfare and signals intelligence missions.

Work on the contract will be carried out by the company’s Aeronautics division – at El Segundo and San Diego, California; Scottsdale, Arizona; Nashua, New Hampshire; and Wayne, New Jersey, US – and is expected to run until 20 February 2023.

The Wright-Patterson Air Force base in Ohio, US, will serve as the contracting office.