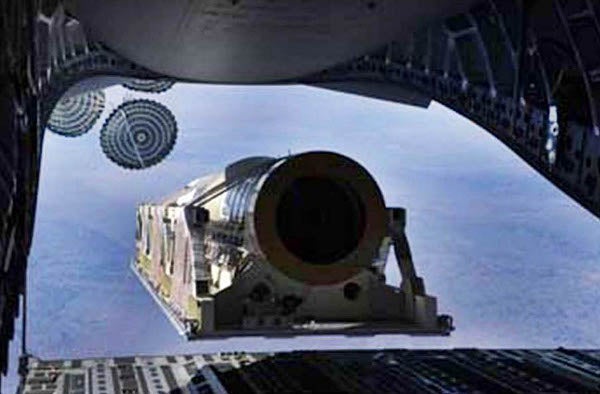 Lockheed Martin, in collaboration with the US Missile Defense Agency (MDA), has successfully carried out flight testing of the prototype air-launched extended medium-range ballistic missile (eMRBM) target at Yuma Proving Ground in Arizona, US.

Released from the cargo bay of a US Air Force (USAF) C-17 Globemaster III aircraft at 25,000ft altitude, the full-scale eMRBM prototype separated from the carriage extraction system during testing, following the deployment of its parachutes.

Lockheed Martin Space Systems Company Strategic and Missile Defense Systems deputy and Missile Defense Systems vice president John Holly said: ”This new target is designed to provide the threat realism that is essential to ensuring that missile defence systems are developed against accurate representations of the systems they would likely encounter in an operational environment.”

A replica of the missile target, the prototype is being used for evaluation of the air-launch equipment and carriage extraction system in preparation for the maiden flight of the eMRBM missile target, which is planned to take place in late 2013.

The prototype, however, does not feature a propulsion system like the original eMRBM target.

Besides MDA and USAF, the flight testing was also supported by the US Army and subcontractors such as Orbital Sciences and Dynetics.

The air-launched eMRBM target is designed to help the MDA in testing the Ballistic Missile Defense System (BMDS) and to allow soldiers to obtain experience with system performance in realistic scenarios.

Around five eMRBM targets were ordered by MDA as part of the targets and countermeasures prime contract, which also covers production and delivery of an additional 12 missile targets of various types and ranges.

Lockheed has successfully delivered and launched 27 missile targets during BMDS tests since the contract was awarded in 2003.

Image: The prototype air-launched eMRBM target being released from a USAF’s C-17 aircraft over Yuma Proving Ground in Arizona, US. Photo: Courtesy of Missile Defense Agency.