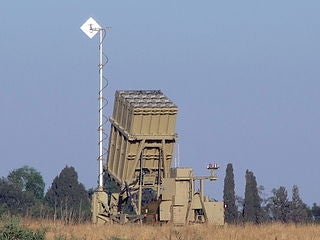 The Israel Defense Force’s (IDF) rocket shield, the Iron Dome anti-rocket defence system, has been deployed in the port city of Eilat, in Southern Israel.

An unidentified IDF servicewoman told RIA Novosti: "Iron Dome is currently being tested all across Israel and it is in this context that it is being based in Eilat."

The spokesperson said the Iron Dome has been installed in the Eilat area for technical reasons, and has nothing to do with the ongoing operational conditions in the area, following a recent rocket attack on the region.

The Israeli Air Force is seeking new technology for its Iron Dome counter rocket defence systems to enhance its capability to intercept longer-range rockets at its borders, using fewer batteries.

Designed to provide protection against short-range rockets, the Iron Dome is capable of countering 155mm artillery shell threats in all weather conditions and can handle multiple threats simultaneously.

Built by Rafael Advanced Defence Systems, the Iron Dome can track threats at a range of up to 70km and has recently undergone a series of tests, validating its ability to intercept longer-range rockets.

IDF has deployed four Iron Dome batteries to date, of which two are operational at Ashkelon and Be’er Sheva and have reportedly intercepted rockets fired from Gaza in March and April 2011, respectively.

As part of an ambitious multi-layered defence programme intended to safeguard against ballistic missile threats, Israel is expected to receive a total of nine batteries within the next two years for deployment along its northern and southern borders.