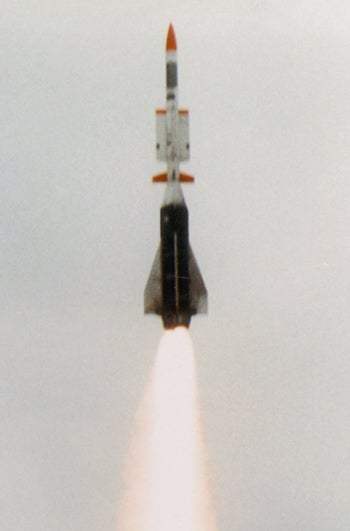 Carried out jointly with Surface-to-Air Engineering Support Squadron 2E950 following a year of preparation, the trial involved implementation of the system’s entire chain of command, including installation of deployable theatre, a detection and control centre (CDC/D) based in Evreux, and an air-defence combat management centre (CMD3D).

Leveraging discrimination capabilities of the SAMP/T’s identification friend or foe (IFF) system, the engagement scenario featured two aerial targets replicating a friendly fighter chased by a hostile aircraft at an altitude of 2,000ft and at a speed of 450k.

Targets identification and classification responsibility was transferred through a Link 16 datalink from the CDC/D to the CMD3D for firing orders during the multi-system firing trial campaign.

The target’s range was 50km at the time of firing, and was intercepted at a range of 40km.

Based at Avord, EDSA 2/95 Sancerre represents the latest squadron to have become operational on the Mamba air-defence system.

Designed for the French Army and Air Force as well as the Italian Army, the system features a network of advanced sensors and radars, including a Thales ARABEL 3D phased array radar, to increase effectiveness against targets at high speeds and altitudes.

Image: A SAMP/T missile being launched.