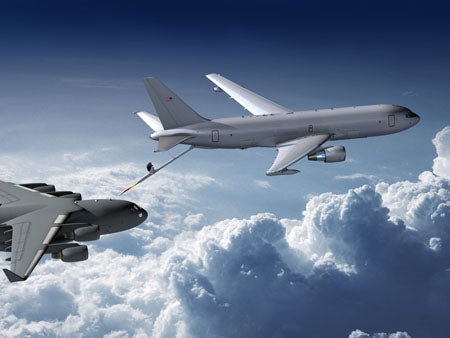 Boeing’s KC-46 next-generation aerial refuelling tanker programme has successfully completed a preliminary design review (PDR) with the US Air Force (USAF), marking a milestone in the development of the tanker.

During the review, conducted between 21 March and 27 April 2012, the preliminary design of the tanker met system requirements paving the way to for a critical design review (CDR) to take place.

Maureen Dougherty, Boeing KC-46 Tanker vice president and program manager, said: "Working closely with our Air Force teammates, we’ve made tremendous progress in the past 14 months, and have the foundations in place to enter the detailed design phase.

"The KC-46 team is designing an aircraft that will offer superior, modern multi-role capabilities, including advanced refuelling systems and military avionics, and the ability to transport cargo, passengers and patients."

Prior to PDR, the Boeing KC-46 team had completed a system requirements review, integrated baseline review, 767-2C PDR, and firm configuration reviews for the 767-2C and the KC-46A tanker over the past year.

A CDR will be conducted to determine whether the KC-46A design is ready to enter the manufacturing phase, which will take place in the summer of 2013.

The KC-46A is a military aerial refuelling and strategic transport aircraft developed by Boeing. The KC-46A aircraft will gradually replace the aging fleet of 176 KC-135E Stratotanker aircraft as the air force’s primary refueller.

The tanker is based on the Boeing 767 commercial airplane, and features a modernised KC-10 boom with a fly-by-wire control system, Boeing 787 Dreamliner electronic displays and a flight control design to maximise combat manoeuvrability.

Boeing is under a contract to deliver 18 KC-46 refuelling aircraft by 2017 as part of the KC-135 replacement programme, which will continue until 2028, with the initial flight of the first aircraft scheduled for late 2014.

Image: The KC-46A has a greater refuelling envelope and fuel offload rate than that of the existing KC-135. Photo: courtesy of Boeing.