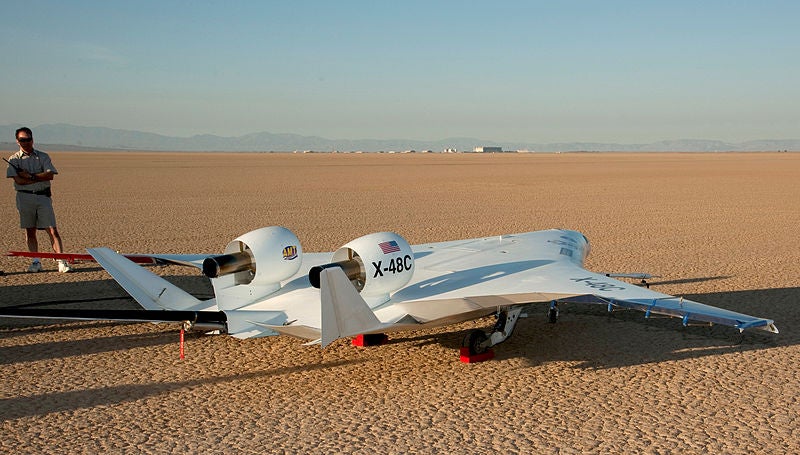 The aircraft operated for approximately 30 minutes, reaching speeds of up to 140m/hr, and attaining an altitude of about 10,000ft on most flights.

Collier added: "Both very quiet and efficient, the concept has shown promise for meeting all of Nasa’s environmental goals for future aircraft designs."

Boeing Senior Technical Fellow and BWB programme manager Bob Liebeck said: "We have shown that a BWB aircraft, which offers the tremendous promise of significantly greater fuel efficiency and reduced noise, can be controlled as effectively as a conventional tube-and-wing aircraft during takeoffs, landings and other low-speed segments of the flight regime."

Designed by Boeing Research & Technology and built by Cranfield Aerospace, the X-48C is a scale model of a heavy-lift subsonic vehicle that aims to replace the conventional tube-and-wing airplane design with a triangular tailless aircraft that effectively merges the vehicle’s wing and body.

A modified version of the X-48B aircraft featuring two 89lb thrust turbojet engines, instead of three 50lb engines, the X-48C’s wingtip winglets have been relocated inboard next to the engines, along with a 2ft extension in aft deck at the rear.

Flown in partnership with Nasa and the Air Force Research Laboratory (AFRL), the aircraft is believed to be ready for aerial refuelling and cargo missions in the next 15 to 20 years.

Image: Nasa-Boeing X-48C BWB technology demonstrator prior to its first flight at Edwards Air Force Base in California, US. Photo: Carla Thomas.