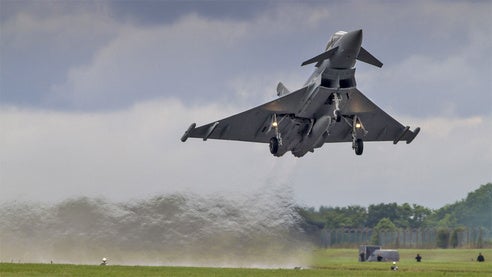 The system has been fielded as part of the Typhoon Availability Service (TAS) programme, which is a complex contract involving aircraft maintenance, technical support, training and asset management in support of Typhoon operations.

BAE Systems Simulation and Modelling head Geoff Pickering said the TPS is a computer game that will predict the impact of a series of scenarios on the rest of the TAS contract, following their entry into the simulation software.

Some scenarios include the affect of deployment of around ten Typhoons for an overseas exercise, or several Typhoons to places like Libya.

"The MoD and BAE Systems have already identified around £2bn through life cost saving opportunities across the programme."

”A good example of this can be seen in the redesign of our support solution at RAF Leuchars, which lowered the expected operation costs while still maintaining the same level of service,” Pickering said.

”The MoD and BAE Systems have already identified around £2bn through life cost saving opportunities across the programme."

Manufactured by a consortium including EADS, Alenia Aeronautica and BAE, Typhoon is a canard-delta wing, multirole fighter designed for deployment during air operations, including air policing, peace support and high-intensity conflict missions worldwide.

Image: A Typhoon fighter aircraft during its flight. Photo: courtesy of BAE Systems.