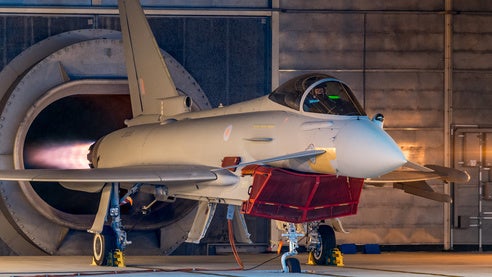 Carried out in three phases along with a Rolls Royce representative, the activity represents the last stage of testing before the aircraft’s first test flight, which is expected to take place before the end of 2013.

Designated as BS116, the aircraft is intended for the UK Royal Air Force (RAF), and features more than 350 modified parts that are designed, engineered and assembled ready to integrate the most advanced capability enhancements.

The enhancements will include conformal fuel tanks, a fuel dump system that will increase the aircraft’s endurance, and extra electrical power and cooling to cater for an E-Scan radar, which will enhance its performance, reliability and availability, while reducing support costs for customers.

"The aircraft can be installed with extra computing power and high speed data network systems to increase capability for the future."

Additionally, the aircraft can be installed with extra computing power and high speed data network systems to increase capability for the future.

A total of 112 Typhoons were ordered by the four Eurofighter partner nations, Germany, Italy, Spain and the UK, under a €9bn Tranche 3A contract signed in June 2009.

Tranche 3 Typhoons deliveries are anticipated to commence later this year.