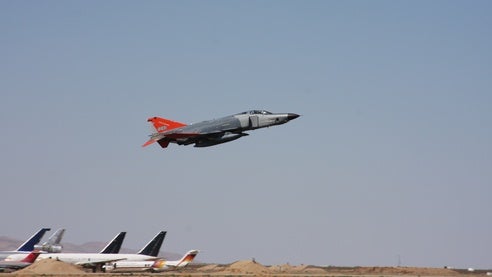 BAE Systems has completed the conversion of the 300th decommissioned F-4 Phantom fighter jet into a QF-4 full-scale aerial target (FSAT) drone for the US Air Force (USAF).

The unmanned target drone will now be delivered to the air force to serve as a realistic full-scale moving target for newly developed air-to-air weapons testing and aircraft training at Tyndall Air Force Base (AFB) in Florida, and Holloman AFB in New Mexico, US.

The conversion of each retired F-4 fighter takes approximately six months, and is carried out at the company’s Flight Systems facilities at Mojave Airport in California, US.

Services may include systems engineering and integration, electrical, mechanical, and software engineering, as well as various types of structural alterations, depending up on the condition of the F-4 Phantoms.

The QF-4 programme is designed to provide remotely controlled, supersonic target drones for weapon system developmental and operational testing by the US and allied militaries.

The supersonic drone, which replicates enemy aircraft manoeuvres in test and training exercises, can also be flown with a safety pilot for performance monitoring and is integrated with electronic and infrared countermeasures for fully validating the aircraft and weapons flown and fired against it.