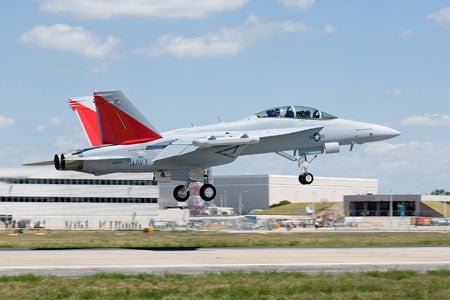 The Australian Government is moving ahead with the conversion of the Royal Australian Air Force’s (RAAF) 12 Boeing-built F-18 Super Hornet fighter aircraft to the EA-18G model, dubbed Growlers, under a refit programme.

Australia’s Defence Minister Stephen Smith and Defence Materiel Minister Jason Clare said in a joint statement that more than $19m will be spent for the purchase of lead item electronic equipment.

The long lead item electronic equipment for the conversion include electronic systems, antennas and high frequency modulation receivers that will be procured through the US Foreign Military Sales route.

The Government has already formally delivered a letter of request to the US as part of the process and will make a final decision this year regarding the conversion after an assessment.

During the production process, around 12 Super Hornet fighters were purchased at a cost of $35m for the Growler upgrade, and retrofitting is expected to cost between $200m and $300m.

The EA-18G Growler is an airborne electronic attack (AEA) aircraft which operates from either an aircraft carrier or from land-bases and is a derivative of the combat-proven two-seat F/A-18 Hornet, the US Navy’s maritime strike aircraft.

The aircraft’s missions are mainly electronic attack (EA) and suppression of enemy air defences (SEAD), particularly at the start and on-going early stages of hostilities.

The first aircraft is likely to be converted at the Boeing factory in St Louis and the remaining jets at Amberley RAAF base near Brisbane.

The Australian Defense Market - Attractiveness, Competitive Landscape and Forecasts to 2024