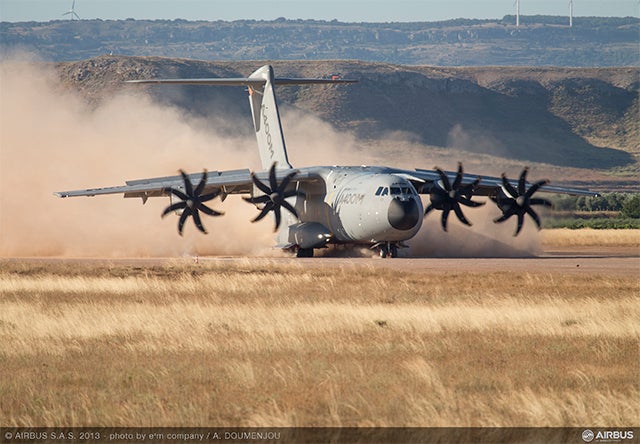 Carried out using second production aircraft, also designated as MSN2, the trials confirmed that the aircraft can perform well on gravel runways, with minimal damage to the exterior from stones and dust.

The aircraft successfully conducted 25 landings during six flights on the same runway with and without the optional nosewheel deflector demonstrating its ability to operate to and from rough strips close to the scene of military or humanitarian action.

Demonstrations included ground manoeuvring, rejected takeoffs, and the use of propeller reverse thrust at speeds as low as 70kt without causing any engine or cockpit contamination.

A400M Flight Tests head Eric Isorce said, ”We are extremely pleased with the results of these tests which were very close to all predictions and confirm the A400M´s capability to operate successfully from gravel runways.”

The results of trials that lasted for more than a week are currently being analysed by the company and Organisation Conjointe De Coopération En Matière D’armement (OCCAR).

The four-EuroProp TP400-D6 turboprop engines powered aircraft has been ordered by the air forces of Belgium, France, Germany, Luxembourg, Malaysia, Spain, Turkey and the UK.