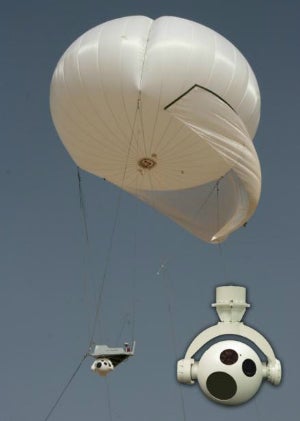 CONTROP is proud to announce that, for the first time ever at an exhibition, the company will be displaying an operating state-of-the-art SPEED-A EO / IR camera payload at the upcoming Paris Air Show 2013.

The SPEED-A is a unique camera payload specifically developed for surveillance on aerostats and balloons.

CONTROP’s SPEED-A payload has recently been ordered by yet an additional customer, this time in Europe, for surveillance applications on aerostats and balloons. The SPEED-A is also being used by the Canadian Army domestically and overseas onboard Aeronautics’ Skystar 300 surveillance aerostat. The SPEED-A is field proven and also used in Israel and multiple other locations with extraordinary results for base and force protection – as well as border protection – and is providing unsurpassed surveillance performance. This extensive and proven operational experience with the SPEED-A provides optimal security of a Forward Operating Base (FOB) in order to ensure secured support of tactical operations.

CONTROP believes that the SPEED-A aerostat payload system can also be well used to provide unique and proven solutions for many other countries as well – for border protection, site security and force protection, mainly due to its versatility for a variety of surface terrains and missions.

The SPEED-A is a unique EO / IR payload with unmatched capabilities which were specifically developed for use on tactical aerostats (balloons) due to its being a state-of-the-art gimbal system – with three gyro stabilized axes. In addition to the pitch and yaw traditional axes, the SPEED-A is also stabilized in the roll axis (which compensates for the unique roll movement of balloons).