Fibre Net is one of the world's leading developers of fibre reinforced polymers (FRP), used to create airport and airfield perimeter fences, as well as for a variety of purposes throughout the construction, building consolidation, energy, transport and industrial sectors. 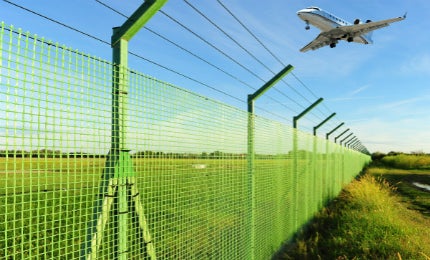 Fibre Net is one of the world’s leading developers of fibre-reinforced polymers (FRP), used to create airport and airfield perimeter fences, as well as a variety of purposes throughout the construction, building consolidation, energy, transport and industrial sectors.

FIBREFENCE fencing systems from Fibre Net are designed to protect sensitive areas around airports and airfields, including radar equipment and instrument landing systems.

All of the main components of the FIBREFENCE from Fibre Net are made from FRPs, namely the mesh, vertical posts, wing-bracings, and outrigger arms. The result is a low initial investment cost, and virtually no maintenance required. To ensure the fence remains robust, all small components of the fence are made with stainless or galvanised steel.

Fibre Net’s fibre-reinforced polymer (FRP) is both frangible and radio-transparent, making it ideal for airport applications.
FIBREFENCE fence solutions are formed of posts, mesh, and accessories made of glass fibres that are filled with thermosetting resins, with high chemical-resistance and mechanical performance.
Fibre Net’s fences have been approved for internal and perimeter use in airports by aviation authorities worldwide, including the ICAO, and are even used in a variety of military applications.

FIBREFENCE is fully radio-transparent, and does not interfere with any landing aid devices (ILS, MLS, GLS, TLS, NDB, VOR, DME) or radars. Fences are also designed to take up minimal space, and reduce visual interference for security personnel supervising the area.

Fences are made from Fibre Net’s unique polymer, and the FIBREFENCE has superb resistance to weathering and UV rays. A mesh section can also be added to the bottom of fences without affecting costs, to avoid small animal intrusion.

Fibre Net has developed unique, frangible technology in order to protect airport components and ensure security, while remaining lightweight and fragile enough to reduce damage to aeroplanes, should an accident happen and an out-track landing be required.

Fences and gates for military airfields

Italian Civil Aviation Authority (ENAC) authority standards are adhered to, as well as all major foreign aviation standards. FIBREFENCE has already been approved and adopted by a number of authorities worldwide.

Special projects have also been developed in cooperation with military forces, to meet even the most demanding applications across the army and airforce sectors.