Aerosweep's FOD*BOSS is a foreign object debris (FOD) sweeper that is used by Airports, Airlines, Military and Air Forces to handle their airfield sweeping programmes. 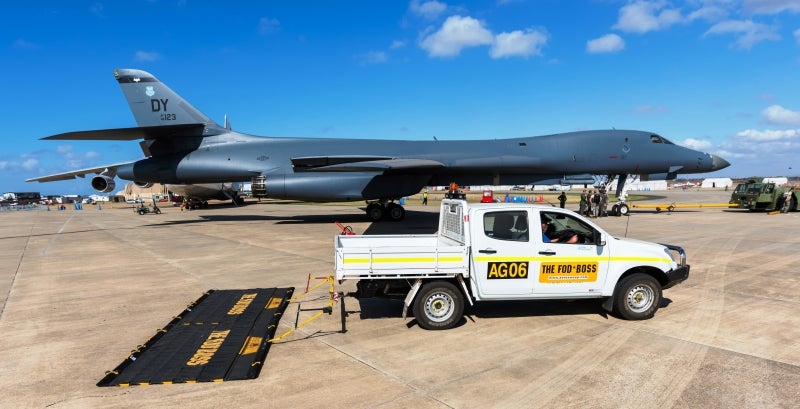 Aerosweep’s FOD*BOSS is a foreign object debris (FOD) sweeper that is used by Airports, Airlines, Military and Air Forces to handle their airfield sweeping programmes.

Aerosweep manufactures the patented FOD BOSS Airfield Sweeping System invented in 1994 specifically for collecting Foreign Object Debris (FOD) from runways and tarmac surfaces. Each FOD BOSS incorporates a series of brushes that activate the FOD, which is collected by rows of specially formulated Aerothane TM blades and entrapped by a retaining mesh cover. Dangerous debris such as nuts and bolts, pavement fragments, loose baggage hardware, washers, rivets, stones, sand, and gravel can be collected with amazing speed and efficiency.

This high-speed, low-cost sweeper works on concrete, asphalt, interlocking pavement, fine textured spray seal, smooth or grooved surfaces, in wet or dry conditions. With sweeping widths of 8ft, 16ft or 24ft. The FOD BOSS works at speeds up to 40mph. The complete unit is portable and folds away into a roller / storage bag in minutes.

Airports, airlines and military aircraft all make use of the Aerosweep’s FOD*BOSS sweeper.
The FOD*BOSS can be used both in wet and dry conditions, and also in day and night.
Companies that use the FOD*BOSS include Delta, United Airlines and FedEx.
The FOD*BOSS ensures quick and efficient removal of foreign object debris (FOD) from the aircraft movement areas.
FOD*BOSS sweeper has been used for more than ten years by military and civil airports around the globe.
The Aerosweep FOD*BOSS packs up small, and is easy to transport.

The FOD*BOSS can be used by one person and towed behind any vehicle. It has no motor and few moving parts, making it virtually maintenance free. It comes with an unconditional lifetime guarantee on manufacture and performance.

The FOD*BOSS is an extremely reliable and versatile FOD removal tool. It can be use in both dry and wet condition and day or night. This versatility is earning it a reputation of being a leading sweeping device for the aviation industry.

The solution can be used at a moment’s notice and can also be operated by any member of a team behind any vehicle. The FOD*BOSS’ top speed is 40km/h (25mph) and it has a sweep width of 8ft-24ft.

The FOD*BOSS has many environmentally friendly properties. For example, it can be operated non-mechanically, which means it can either be towed by battery or electric-powered vehicles – a first for the airfield sweeping industry.

These green properties and reliability have made the product attractive to companies such as FedEx, Delta and United Airlines, who are all carriers that have the FOD*BOSS into their FOD programs with outstanding results.

Considering the damage that can be cause by FOD to aircraft tyres, it is clear why major airlines now place such high important on the removal of FOD quickly and efficient from aircraft movement areas.

It can cost up to hundreds of thousands of dollars to repair or replace military aircraft components that have been damage by even one single FOD stroke. This is why those at military bases have been making use of the FOD*BOSS sweeper for more than a decade.

The product was initially introduced into Australia under the Royal Australian Air Force (RAAF), however the solution has now spread across the globe and is now used by every major Air Force; help protect the most valuable and high-tech aircraft from damaging and dangerous FOD-related incidents.

FOD*BOSS is particularly used with jets just as F22 Raptors, RAF Tornados, F14s, which are especially prone to FOD damage.

Testimonials for the FOD*BOSS

"I have used the FOD*BOSS product when I was in the F-14 community and it saved millions of dollars in fodded engines.
Once we received the FOD*BOSS, we did not have another fodded engine until we went to the ship. So with that, I say thank you!"
— U.S Military VAW-121 AMO

"Our first FOD Boss unit was approximately 2 ½ years old and used daily. It’s estimated that the unit acquired between 8,000-8,500 miles of usage picking up an estimated 32,000 lbs. of debris (Potential FOD). Calculations were based on 800 + days of usage, 10 miles per day and 40 lbs. per day of debris collected. Today, we still believe in the FOD Boss and continue to use daily."
— Operations Safety & Audit Manager, Airways USA

Can Russia make the grade with the Checkmate?

After its official debut at the end of last year, there are still many unanswered questions about Russia’s fifth-generation fighter jet, the Sukhoi Su-75.