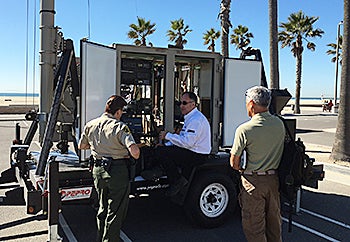 The LA-RICS project is one of five national early deployment efforts in support of the FirstNet Public Safety Broadband Network.

The self-contained TCU is highly mobile and can be set-up and operated by a single person. The EMP hardened shelter encloses the TCU and the unit is self-powered with a four-day capacity diesel generator together with solar panels and backup batteries. The TCU has the short network capacity for 1,000 registered handsets and 100 co-current sessions. The medium and long range network incorporates P25, cellular, UHF, VHF connections and the ability to operate two simultaneous independent HF networks.

"The TCU has been developed as a real solution for back-up voice and data communications. We are seeing more and more government organisation identifying the need for a system that is highly mobile and quick and easy to setup in the back ground to maintain communications in the event of a disaster, it’s the safety net to FirstNet," said Mr John Rosica, president of NVIS Communications, the Barrett Communications system integrator in the US.

The TCU will be on display at the International Wireless Communications Expo (IWCE) in Las Vegas on 23 and 24 March 2016. Visit stand 549 for further information on this system and its capabilities.