US Air Force and US Navy

An AIM-120 advanced medium range air-to-air missile on the right wing of the F-15 Eagle aircraft, US Air Force photo. 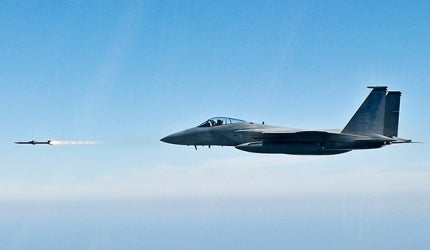 AIM-120 advanced medium-range air-to-air missile (AMRAAM) is a new generation all-weather, missile manufactured by Raytheon. The AMRAAM is in service with the US Air Force (USAF), US Navy (USN), and US-allied nations.

The AMRAAM has been delivered to more than 36 countries. The missile has completed over 1.8 million captive-carry hours and 2,900 live firings. It is integrated with combat aircraft such as the F-15, F-16, F/A-18, F-22, Typhoon, Gripen, Tornado, Harrier, F-4, and the F-35 Joint Strike Fighter. It is also used by the Surface-Launched AMRAAM of the US Army and NASAMS (Norwegian Advanced Surface to Air Missile System).

In August 2004, the UK Ministry of Defence (MoD) placed a $144m contract with Raytheon Missile Systems for the latest AIM-120 C5 variant. Raytheon received a $200m contract from the US Air Force for 434 missiles in December 2004.

In 2007, the US Government agreed to sell 218 AIM-120C-7 missiles to Taiwan under a $421m arms sales package. The Finnish MoD placed an order for 300 AMRAAMs in 2008. Deliveries have been delayed due to the malfunction of rocket motors during cold weather tests.

The company received a $768m contract from the US Air Force for production Lot 33 of the missiles, in December 2019. The contract includes production of AMRAAM missiles, captive air training missiles, guidance sections, AMRAAM telemetry system and support hardware which will be delivered by February 2023.

The USAF awarded a contract modification worth $573m to the company to continue its works for building AMRAAM, in March 2016.The UK Government’s request for the procurement of up to 200 AMRAAM AIM-120D missiles was approved in July 2018. Hungary will purchase 180 AIM-120C-7 missiles in a deal estimated at $500m. In October 2019, the US Government approved a potential sale of 120 AIM-120C-7/C-8 AMRAAMs, along with containers, spares and support equipment to South Korea. The US State Department also cleared the sale of 118 AIM-120C-7/C-8 missiles as part of an integrated air defense weapon system (IADWS) to India in February 2020.

The AMRAAM is a joint USAF and USN programme led by the Air Force. The conceptual phase of the programme was completed in February 1979 when Hughes Aircraft and Raytheon were selected as preferred contractors by the USAF to continue into the validation phase.

Raytheon was chosen as a follow on manufacturer. The production contract was awarded to both companies in 1987. More than 200 missiles were test-fired during the flight-tests.

In February 2012, communications company Harris won a $11m follow-on contract from the USAF to provide warhead replacement tactical telemetry modules (WRTTM) for the AMRAAM. The contract increased the total contract value under the WRTTM programme to over $181m since 1991.

Derived from the Sparrow range of missiles, the AMRAAM was designed to be quicker, smaller and lighter than the Sparrow. The missile’s layout is divided into guidance, armament, propulsion and control sections. The missile has beyond-visual-range and home-on-jamming capabilities.

The AMRAAM has a length of 3.6m, diameter of 17.7cm and wingspan of 52.5cm. The launch weight of the missile is 150.7kg. It is capable of carrying an 18.1kg high-explosive blast fragmentation warhead to a maximum range of between 20 to 30 nautical miles (nm).

Four variants of the AMRAAM have been manufactured. The AIM-120A is the first variant, which is no longer in production. The AIM-120B is an improved variant introduced in 1994. The AIM-120C has smaller control surfaces to enable internal carriage on the F/A-22 aircraft and carries an improved warhead. It was further upgraded to create a new variant called AIM-120C-7, which was successfully tested in 2003.

The AIM-120D is the newest member in the family of AMRAAM. The variant completed its seventh test flight in May 2009, and integrates advanced hardware and software systems for improved navigation, range and HOBS (High-Angle Off-Boresight) capability. The FOT&E of the AIM-120D variant was finished in July 2014 and a total of 1,031 AIM-120D missiles were delivered for the US Air Force and Navy by October 2014.

The AIM-120 AMRAAM receives information about the location of the target from the aircraft before its launch. The onboard active radar with inertial navigation system (INS) makes the missile less dependent on aircraft’s fire control radar and integrates a datalink to guide the missile. Once the missile closes to self-homing distance, the active radar guides it towards the target. This feature provides fire and forget capability to the missile and allows the pilot to fire number of missiles simultaneously at multiple targets.

An alternative rocket motor for the AIM-120 AMRAAM is being developed by Raytheon and the Norwegian defence company, NAMMO.

Signal Technology received a contract for producing oscillators for the AMRAAM in May 2003.

L-3 Communications’ Electron Devices division secured a $6.9m, six-year contract from Raytheon Missile Systems Division for the delivery of travelling wave tubes for the missile for the period starting 2003 through 2008.