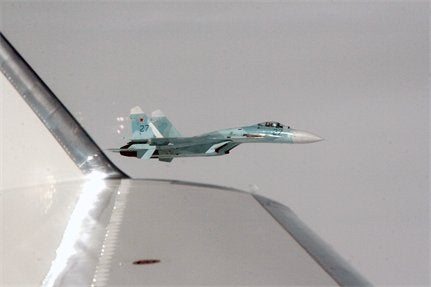 The North American Aerospace Defense Command (NORAD) is conducting the annual cooperative air defence exercise, Vigilant Eagle 2013, with the Russian and Canadian air forces, to improve their ability to provide a coordinated response in the event of a terrorist attack on a passenger aircraft.

Bonnet added: "The US and Russian air forces will launch or divert fighter jets to investigate and follow the suspect aircraft, after it fails to respond to communications, and will also participate in co-operative escort and handoff procedures using two different communications, command-and-control and air traffic control systems.

”This is the culmination of everything that has gone on in previous exercises, and we expect it to continue to mature.”

"This is the culmination of everything that has gone on in previous exercises, and we expect it to continue to mature."

The US Air Force’s airborne warning and control system (AWACS) and Russia’s A-50 Beriev will serve as command-and-control platforms, whereas Canadian CF-18 Hornet and Russian Sukhoi fighter aircraft are tasked with tracking, identifying, intercepting and following the hijacked aircraft, and air-to-air refuelling operations.

Meanwhile, the hijacked commercial airliners are being simulated by a Russian Tupolev and a commercial aircraft contracted by the US.

Besides NORAD, Russian and Canadian air forces, the Federal Aviation Administration (FAA) and its Russian counterpart are also participating in the exercise.

Initiated in 2008 with a computer simulated exercise, Vigilant Eagle intends to continue the development of cooperation between the Russian air force and NORAD in preventing and combating potential air terrorism threats.

The Military Radar Market in Algeria to 2024: Market Brief