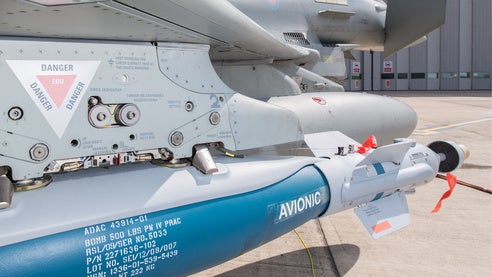 The UK Royal Air Force’s (RAF) Tranche 2 Typhoon multirole combat aircraft have conducted firing of the inert Paveway II bombs for the first time during a series of training sorties over the Ministry of Defence’s (MoD) firing range at Cape Wrath in northern Scotland, UK.

Carried out by the RAF’s 6 Squadron Typhoons last week, the Paveway II bombing runs formed part of an operational training week, which readies pilots and the squadron for any contingent operations it is likely to perform.

6 Squadron commanding officer wing commander Mike Baulkwill said: ”The successful delivery of Paveway II from a Tranche 2 Typhoon is another step forward in the development of the platform’s multi-role combat capability.”

”Working under a more operational focus for a week or two at a time puts everyone in the right frame of mind so that when called upon to go on operations pilots, engineers and operational support staff are always ready,” Gibb added.

As well as enabling squadron engineers and support staff to undertake training and practice missions with live and training weapons, the exercise also formed part of the RAF Regiment forward air controllers training for Afghanistan.

Considered a derivative of the Mk 82 general-purpose bomb, the Paveway II is a precision laser-guided bomb, which can be fired by the Litening III targeting pod, or from troops on the ground using a laser target designator.

Manufactured by a consortium of EADS, Alenia Aeronautica and BAE, Typhoon is a twin-engine, canard-delta wing, multirole fighter designed for deployment during air operations, including air policing, peace support and high-intensity conflict missions across the globe.

The Missiles and Missile Defense Systems Market in the United Kingdom to 2025: Market Brief

The Missiles and Missile Defense Systems Market in the United Kingdom to 2024: Market Brief