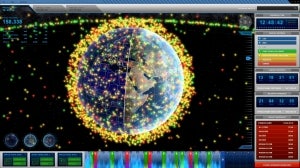 "Our net-centric design approach allows Space Fence to be easily integrated into the broader US Space Surveillance Network of sensors already operated by the Air Force."

The radar system will be able to detect orbiting objects and debris passing over the US, and will replace the existing USAF space surveillance system, known as VHF Fence, originally installed in 1961.

The Space Fence radars will be located at strategic sites globally to expand worldwide surveillance coverage.

Lockheed received an 18-month $107m Space Fence prototype contract from the USAF in January 2011 and the preliminary design of the system was recently formally approved.

The USAF is planning to award a Space Fence production contract later in 2012 while the initial operational capability of the first of several Space Fence sites is expected in 2017.