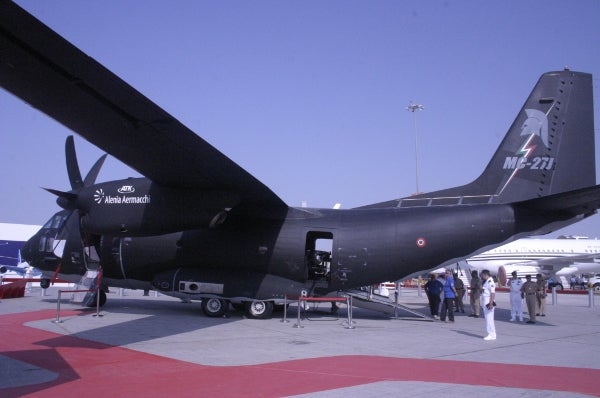 The Finmeccanica Company and the Italian Air Force signed the agreement at the ongoing Dubai Airshow 2013.

The Praetorian, which is a specialised version of the MC-27J, is expected to support the Italian Special Forces and Comando Operativo Forze Speciali (COFS) in their missions.

Designed to provide 360° coverage against air-to-air and surface-to-air threats in the battlefield, the Praetorian is an advanced electronic warfare (EW) suite, including computers, cameras and unspecified fire-support systems.

As part of the two-phased Praetorian project, Alenia Aermacchi will first develop and deliver the Praetorian prototype to the Italian Air Force in spring 2014, for immediate testing in the threatre.

The industrialisation of the Praetorian configuration and related logistic support will form part of the phase two.

"The Finmeccanica Company and the Italian Air Force signed the agreement at the ongoing Dubai Airshow 2013."

The Italian Air Force plans to convert its current three C-27Js into the Praetorian configuration throughout 2016 and will include mission systems, C3ISR equipment and palletised support / fire systems.

An additional three aircraft will also have the same mission package capabilities, according to the company.

Alenia Aermacchi will partner with US-based ATK to develop the Praetorian mission and air-to-ground support systems while Selex, a Finmeccanica Company, will coordinate with Alenia Aermacchi for communication and data link solutions.

Jointly developed by Alenia Aermacchi and ATK, the MC-27J is an advanced defence system, which is based on the C-27J, a twin-engine turboprop tactical transport aircraft.

Image: The Praetorian is expected to provide 360° coverage for the Italian Forces against air-to-air and surface-to-air threats in the battlefield. Photo: courtesy of Alenia Aermacchi.