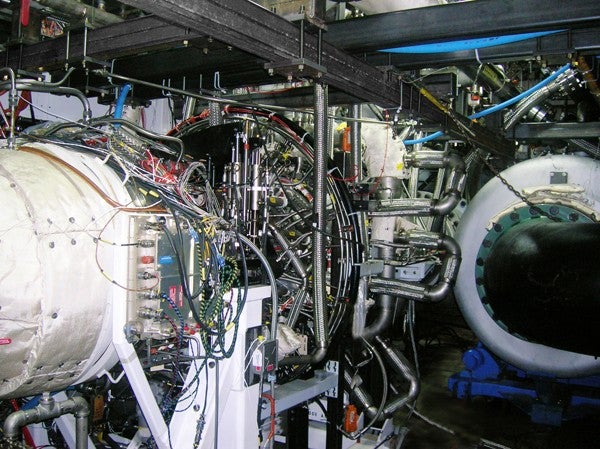 The core test will demonstrate GE’s most advanced core propulsion technologies including lightweight, heat-resistant ceramic matrix composite (CMC) materials and will be conducted as part of a contract awarded in September 2012, for maturing ADVENT technologies for the Air Force’s Adaptive Engine Technology Development (AETD) programme.

AETD programme general manager Dan McCormick added: ”Along with advanced controls and exhaust system designs, we will integrate proven ADVENT technologies like third-stream cooling and CMCs into our AETD engine.”

Combined with an adaptive low pressure spool, the technologies are expected to deliver a 25% enhancement in fuel efficiency, a 30% increase in operating range and a 5-10% improvement in thrust compared to existing fixed-cycle engines.

Pursued in two phases, the AETD involves the demonstration of an advanced high-pressure ratio core by late 2015, followed by fan rig testing and full-engine core tests in 2016, leading to a notional first full engine test in 2017.

GE received the ADVENT Phase I contract in August 2007 for exploring concepts, testing of critical components, and the development of preliminary engine designs.

The ADVENT programme aims to development an efficient variable cycle engine in the 20,000lbf thrust class, to provide a next-generation military aircraft with greater range and mission flexibility, as well as enhanced thermal management capabilities in the beyond-2020 timeframe.