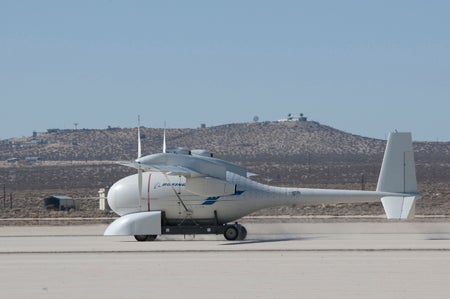 During the testing, the liquid hydrogen-powered demonstrator UCAV travelled atop its launching cart system and reached speeds of up to 40k.

The company has also enhanced the aircraft’s landing system based on lessons learnt from its initial flight, during which the landing gear broke after digging into Edwards AFB’s lakebed.

"Software and hardware upgrades, required to prepare the UCAV for high-altitude flights, have also been completed."

The UCAV reached an altitude of 4,080ft and speeds of up to 62k during its 28-minute first test flight at Nasa’s Dryden Flight Research Center at Edwards AFB in June 2012.

Designed and manufactured by Boeing Phantom Works, the Phantom Eye is designed to assist the US military in conducting intelligence, surveillance and reconnaissance (ISR) missions in Afghanistan.

Featuring a wing-span of 150ft, the fixed-wing UAV will cruise at 150k, carry up to 450lb and stay aloft at altitudes of 65,000ft for up to four days, while performing surveillance over a large area.