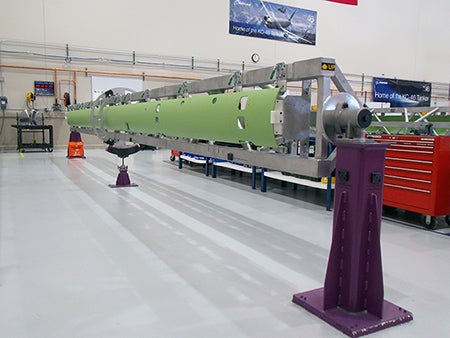 The US Air Force’s (USAF) KC-46A aerial refuelling tanker development programme has moved ahead with the start of assembly of the second refuelling boom at Boeing’s facility in Seattle, US.

Once assembled, the refuelling boom is scheduled to be mounted on a test aircraft for further validation of its design.

Boeing is currently manufacturing five test booms, of which the first will be utilised for risk-reducing laboratory tests at a System Integration Lab (SIL), also called as SIL 0, in early 2014.

Boeing KC-46 vice-president and programme manager Maureen Dougherty said the KC-46 boom is based on the proven KC-10 tanker’s boom, which has performed extremely well in 30 years of its operation.

"Our team is achieving significant milestones as we prepare for flight tests to begin, and we remain focused on delivering this capability on schedule,” Dougherty said.

Manufactured at KC-46 Boom Assembly Center at Boeing Field in Seattle, the modernised fly-by-wire boom is expected to provide KC-46 tanker with advanced refuelling capabilities, enabling it to refuel any fixed-wing receiver aircraft anytime and on any mission.

"The KC-46 boom is based on the KC-10 tanker’s boom, which has performed well in 30 years of its operation."

Boeing is currently under contract to deliver 18 KC-46 refuelling aircraft by 2017 to the USAF, which is planning to acquire a total of 179 tankers by 2027.

An initial test flight of the fully-equipped KC-46A tanker is planned for early 2015, while delivery will take place in 2016.

Image: The skin of the second KC-46A boom being loaded into a jig at Boeing’s boom assembly centre in Seattle, US. Photo: courtesy of Boeing.