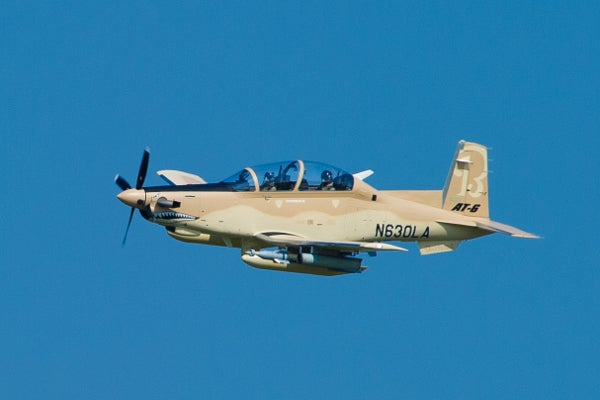 Beechcraft has carried out the initial test flight of its first production AT-6 light attack aircraft at its facility in Wichita, Kansas, US.

Having already completed more than 1,600 flight hours, the aircraft is being offered to the US allies seeking light attack air support for demanding missions.

Beechcraft CEO Bill Boisture said the flight test demonstrates the collaborative effort of the entire Beechcraft team involved in the design, development and production of the AT-6 aircraft.

”We have seen a growing interest in the AT-6 from the defence establishment around the world and we are eager to provide proven reliability and a cost-effective solution to meet the light attack mission needs of our customers,” Boisture said.

"The aircraft is being offered to the US allies seeking light attack air support for demanding missions."

Beechcraft Defense Company president Russ Bartlett said: ”This light attack aircraft is outfitted with state-of-the-art equipment and avionics that will provide partnering nations with a proven air platform and weapons systems that are already in use by air forces around the world.”

Powered by a single Pratt and Whitney PT6A-68D engine, the AT-6 is an armed variant of T-6B Texan II aircraft under development to support a variety of operations, including training, manned intelligence surveillance and reconnaissance, and light precision attack missions.

Image: The AT-6 light attack aircraft during its first production test flight at Beechcraft’s facility in Kansas, US. Photo: © Beechcraft Corporation.