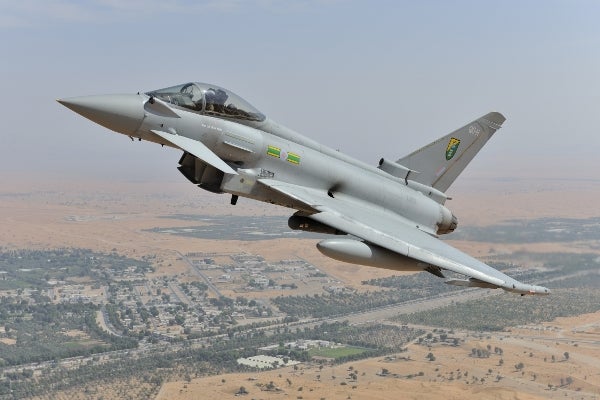 Alenia Aermacchi has received a contract from Eurocopter to supply components and support services for the Royal Air Force of Oman’s (RAFO) Typhoon multi-role combat aircraft.

Covering the delivery of components, systems and support services, the €170m contract forms part of a £2.5bn award received by BAE Systems in December 2012 for delivery of a total of 12 Tranche 3 Typhoon and eight Hawk 128 Advanced Jet Trainer (AJT) aircraft to RAFO.

The company will also provide additional services and activities for the initial five-year logistics support package, which was requested by the air force along with the government-to-government deal.

A request for proposals was issued by the air force in January 2012, but the deal was put on hold as the country moved ahead with its planned acquisition of a second batch of 12 F-16C/D Block 50 fighters from Lockheed Martin.

Manufactured by a consortium including EADS, Alenia Aeronautica and BAE, Typhoon is a twin-engine, canard-delta wing, multirole fighter designed for deployment during air operations, including air policing, peace support and high-intensity conflict missions across the globe.

The aircraft was commissioned in 2004, and is expected to remain in operational service until 2040.

Contract deliveries will commence in 2014, while the first aircraft is scheduled to be delivered to RAFO in 2017.

Image: A Eurofighter Typhoon fighter during its flight. Photo: Courtesy and © 2012 Alenia Aermacchi.