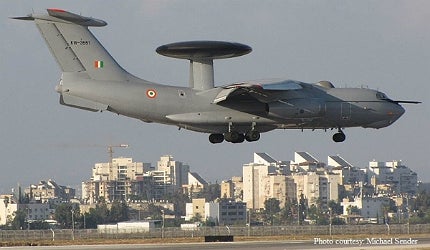 Modern military operations rely heavily on controlling the skies, and while close air support is probably the most conspicuous aspect of this, effective airborne early warning and control (AEW&C) systems represent an equally vital - if less visible - component of aerial defence.

Nowhere has taken this doctrine so much to heart, it seems, as Asia, where the race for modern early warning solutions has forged the whole region into one of the world's fastest growing and most competitive markets for AEW&C technologies.

Against a backdrop of accelerated military spending, territorial disputes and traditional rivalries, many countries have felt themselves compelled to upgrade their airborne surveillance and warning capabilities, adding both foreign-sourced and indigenously-developed systems and platforms to their inventories.

"For the last ten years, India has embarked on a comprehensive programme to upgrade its air force, largely to address regional imbalances."

For the last ten years, India has embarked on a comprehensive programme to upgrade its air force, largely to address the growing regional imbalances generated by the military ambitions of its two near-neighbours, China and Pakistan, with AEW&C capabilities being identified early on as one of the key areas for improvement.

Embraer 145 is one of the aircraft chosen to meet that need, with three currently on order under an agreement signed with the Brazilian manufacturer in 2008. The airframe, originally developed for the Embraer ERJ-145 regional jetliner, has already formed the basis of the successful EMB-145 AEW&C - built around Saab (formerly Ericsson) Microwave Systems's ERIEYE active, phased-array pulse-Doppler radar.

Inside the F-35's engines: powering the fifth generation

Engines aboard Lockheed Martin's next generation F-35 fighters have been almost 30 years in the making.

With a maximum speed of around 518mph (834kph), a range of slightly more than 1,876 miles (3020km) and a service ceiling of 37,000 feet (11,278), according to the Brazilian Air Force, the Embraer provides 95% of the capabilities of the world's largest AEW&C aircraft, in an airframe less than 100 feet (30m) long. New Delhi clearly believes this kind of performance will go a long way towards redressing the balance of power in the region.

Nevertheless, those larger early warning aircraft remain alluring. In 2004, India signed a $1.1bn contract with Israel Aerospace Industries (IAI) for the EL/W-2090 Phalcon Airborne Early Warning and Control (AEW&C) radar system, and also reached a separate deal with the Russian Ilyushin Corporation for the supply of Il-76 heavy military transports as platforms. The first of these aircraft was received in May 2009, and there are now three in service, an additional two on order and possible plans for a sixth.

"Beijing recently agreed the provision of four Shaanxi Y-8 to Pakistan, as part of the growing military collaboration between the two countries."

A further development of their earlier EL/M-2075 and EL/W-2085 Phalcon systems, IAI's solution is said to be one of the most advanced in the world and can be installed on a number of platforms, including Boeing 707, 767 and 747, Airbus and C-130 airframes, in addition to India's choice of the Ilyushin 76.

At its heart lies an active electronically scanned array (AESA), which like the ERIEYE avoids the need for a physically rotating dome. Operating on a pseudorandom frequency set and achieving track initiation in less than four seconds - at least five times faster than an equivalent rotodome system - the phased AESA radar is hard for an enemy to detect or jam.

The effect is further enhanced by IAI's unique technology, which continuously co-relates and co-ordinates data gathered by the system's other three sensors - phased array IFF, ESM / ELINT and CSM / COMINT - automatically initiating an active search across all, when anyone indicates a detection.

Able to track multiple, fast manoeuvring targets at a range of up to 250 miles (400km), and with a communication suite which guarantees secure long-distance voice / data links to air, ground and sea bolstering its command-and-control role, Phalcon represents a significant force multiplier.

China and Pakistan: the race for early warning missile technology

"A further development of their earlier EL/M-2075 and EL/W-2085 Phalcon systems, IAI's solution is said to be one of the most advanced in the world."

China was also quick to appreciate the benefits of that kind of technology, but when IAI pulled out of a deal to supply Phalcon systems, bowing to pressure from the US, Beijing was largely left to concentrate on home-grown solutions, such as the Shaanxi Y-8 AWACS and Y-8J AEW.

Derived from the Soviet-designed Antonov An-12, early versions of these AEW&C aircraft were fitted with conventional AWACS rotodome radars, but the latest Shaanxi aircraft are said to be equipped with AESA following the wider trend towards this technology for airborne early warning.

Dr Gareth Evans reports on how the world’s fifth generation of fighter aircraft will be armed with an astonishing array of agile and discerning network-centric air-to-air missiles.

Beijing recently agreed the provision of four Shaanxi Y-8 to Pakistan, as part of the growing military collaboration between the two countries, which according to some analysts was given added impetus by India's acquisition of the Phalcon system, which arguably shifted the strategic balance. Pakistan already had similar AEW capability to that offered by its rival's ordered Embraer 145s, in the form of the two Saab 2000 platforms fitted with the ERIEYE system which are reported to have been delivered to the Pakistani Air Force under a contract dating from 2006.

Interest in such airborne early warning solutions appears to be on the rise, as many of the region's smaller nations seek to upgrade their air defences in line with neighbouring states, gaining the added benefits such systems can bring in controlling their borders, waters and economic zones.

The ERIEYE itself has been steadily gaining ground, giving Saab a strong toe-hold in the fiercely competitive Asian AEW&C market, with recent purchasers including the Royal Thai Air Force, on this occasion onboard Saab 340 aircraft, but other systems are making their mark too. On 13 April, for instance, the Republic of Singapore Air Force brought four Gulfstream G550-AEW jets into operation. These new aircraft, with a detection range of more than 200 miles (320km), replaced the ageing E-2C Hawkeyes which had served for more than two decades.

The timing could be seen as meaningful; just one day earlier, and despite widespread international condemnation, Kim Jong-un's North Korea had made its latest, and swiftly aborted, missile launch. In a region wracked with tension and driven by the demands of its own unique dynamics of power and influence, the 'eye-in-the-sky' is a must-have on air force inventories - and is likely to remain so for some time.

USAF “has already built and flown its next-gen fighter jet”

KBR to carry out base operations for USAFE-AFAFRICA

US Air Force “must accelerate” transition to future force: CSAF