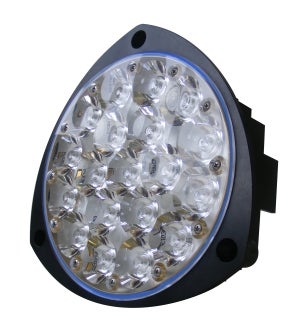 Oxley Developments was the proud recipient of two awards at the recent CN Group Business Awards.

The team were awarded the coveted Innovation Award for the development of a high intensity LED landing light. The light has been designed for use on fast jets but is also suitable for military and civil aircraft. The solution is lightweight, has excellent resistance to shock and vibration and delivers a mean time before failure of more than 10,000 hours and with a peak intensity of 400,000 candelas it is the brightest light Oxley has ever produced.

The panel of judges were particularly impressed with the benefits the light offered over existing technology and the cost savings that can be delivered for customers – up to £100,000 an aircraft.

Oxley was also the joint winner of the Manufacturing Business of the Year award. A major achievement, as Cumbria is home to a large number of world class manufacturers. The judges commended Oxley on being a market leader in LED lighting and night vision solutions and highlighted that the group is renowned for an innovative approach to new product design and the development of technology.

This award reflects the recent investment Oxley has made in a new state-of-the-art production area, the new facility is enabling more efficient working on a range of contracts including the supply of LED lighting to submarines for the Australian Navy and smart interior lighting for the Foxhound armoured vehicle.

Oxley has enjoyed a number of recent contract successes including providing LED navigation lighting for the two new Queen Elizabeth class aircraft carriers currently under construction for the Royal Navy. The team are currently working on one of the most complex lighting systems ever produced by the company, for the fly-by-wire refueling boom of the KC-46, a multi-mission military aerial refueling aircraft under development by Boeing.

The CN Business Awards celebrate the success and enterprise of Cumbrian businesses. The winners were selected by a panel of independent judges, and winning two awards was a particular achievement for Oxley as submissions were up by 40% and the judges commented on the very high calibre of entries. Previous finalists and winners range from house builders to tourist attractions as well as key industry players such as United Biscuits, The Stobart Group and GlaxoSmithKline.

Commenting on the win, Oxley Group CEO Martin Blakstad said: "To win one award is an honour, to win two awards was a fantastic achievement and is a credit to the dedication and expertise of the whole Oxley team, we’re delighted to be recognised for both our leading edge design capability and our manufacturing expertise, highlighting that Oxley can provide customers with a complete end to end solution."

Oxley Group has secured its position as leading the global market in aerospace LED lighting...

Oxley Group is pleased to announce it has been shortlisted in the prestigious 2017 Business...