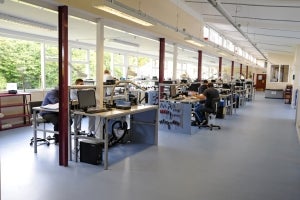 Representatives from the Boeing project team working on the next-generation KC-46 tanker programme for the US Air Force toured new production facilities during their visit to Oxley in Ulverston.

The Seattle-based team visited the Priory Park site and praised the quality of the new state of the art production facility and Oxley’s in-house specialist testing facilities. They were at Oxley to review progress on the contract awarded in November 2012 to design and develop an LED lighting solution for the KC-46 fly-by-wire refueling boom, which enhances the tanker’s capability to refuel any fixed-wing receiver aircraft.

The light is one of the most complex ever produced by Oxley. Not only must it meet aerospace, environmental and EMC standards but it also needs to measure up to the rigorous US Federal Aviation Administration software standard that ensures reliable performance in an airborne environment.

The KC-46 is a multi-mission military aerial refueling aircraft developed by Boeing from its 767 commercial jetliner. The first test aircraft is expected to roll out of the factory in January 2014. Boeing expects to build and deliver the first 18 KC-46As by 2017 with an extended production target of 179 aircraft by 2027.

The visit to Ulverston was a scheduled programme management review and marked a successful milestone in the contract. The refuelling boom light is the second major project with Boeing; Oxley has previously provided the external LED lighting for the company’s C-17 military transport aircraft.

Oxley Group has secured its position as leading the global market in aerospace LED lighting...

Oxley Group is pleased to announce it has been shortlisted in the prestigious 2017 Business...