According to analytics firm GlobalData, the third financial quarter of 2021 (Q3) saw the global M&A deal value drop slightly below the $1tn mark it previously hit in Q2 2021, with the biggest M&A deals recorded for the apparel sector.

The data comes in a recent report from the firm analysing the disruptive themes that have driven M&A activity in the quarter across 18 sectors, showing a world on the mend after Covid-19. With more of us being seen in public, style is returning in some style. Meanwhile, themes driving investment tell different, varied stories to the virus-heavy trends this time last year. 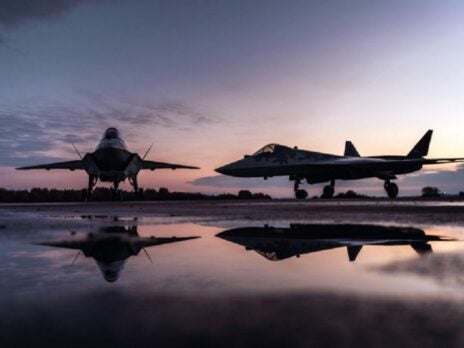 Can Russia make the grade with the Checkmate? 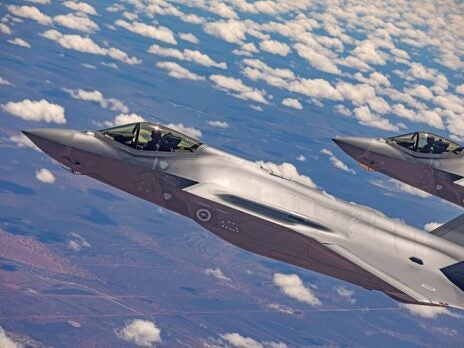 After apparel, the aerospace, defense & security (ADS) sector recorded the next highest growth in deal value, with the healthcare sector following in third place, compared to Q3 2020.

As Verdict explores, the research from GlobalData also reveals interesting activity, or lack of it, in the oil and tourism sectors.

Compared to the previous quarter, all regions except China reported a decrease in deal volume in Q3 2021. 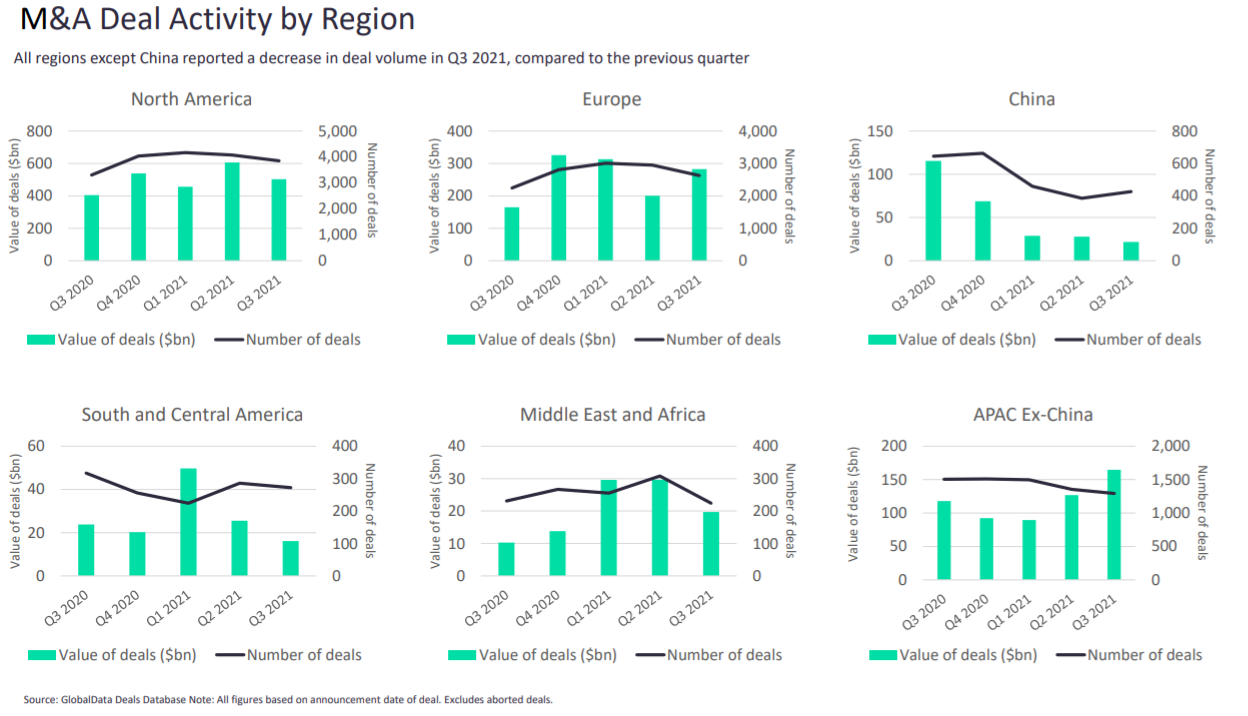 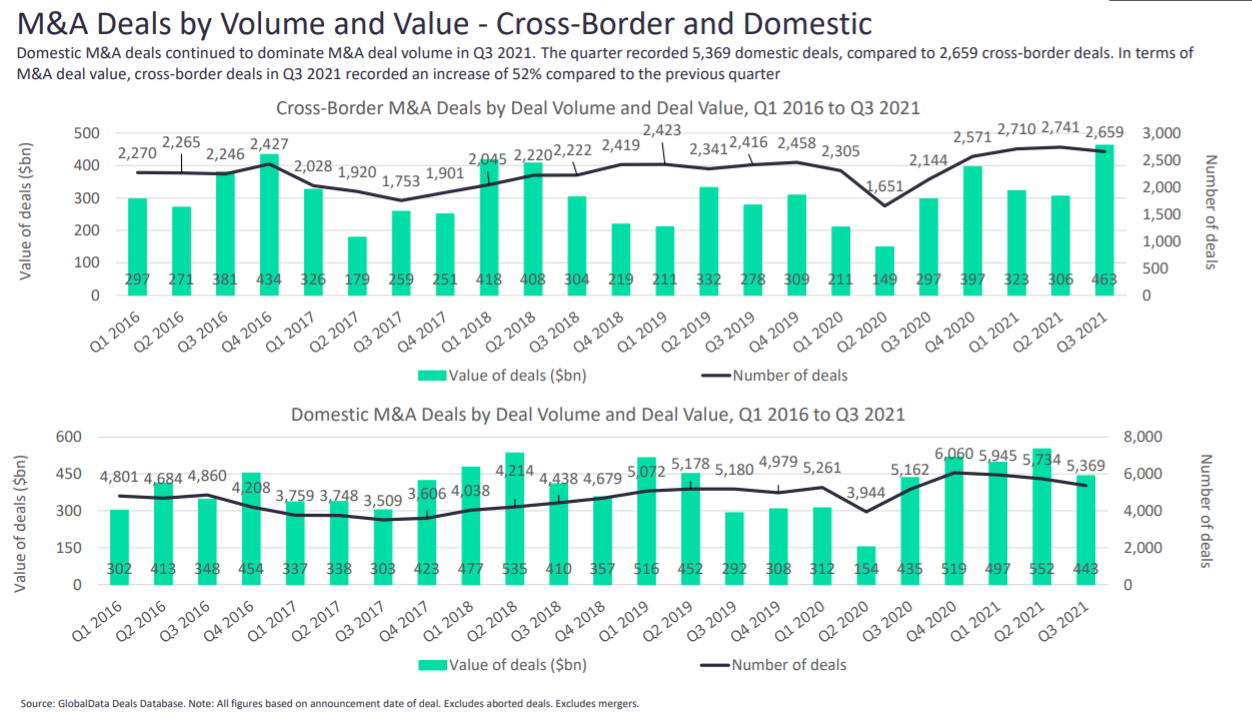 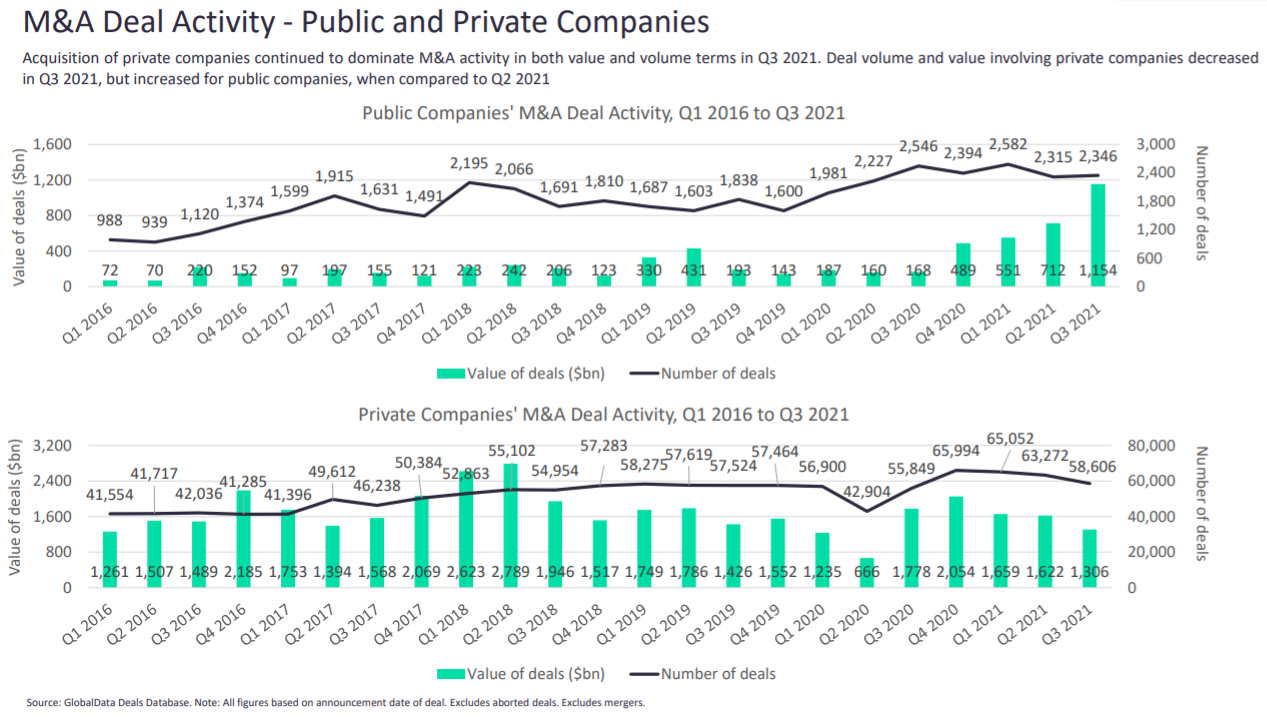 Most deals came largely supported by the tech, media and telecom (TMT) sector, representing over a third of the total 8,650 M&A deals and contributing to 22% of total transaction value.

When looking at Q3 2020, the apparel sector registered the highest growth in Q3 2021 in terms of both deal value and deal volume.

The global M&A apparel market saw three billion-dollar-plus M&A deals in Q3 2021, compared to just one in the previous quarter.

Although domestic deals continued to dominate in terms of deal volume, cross-border M&A deal value and volume recorded growth in Q3 2021 compared to the previous quarter.

Footwear, followed by accessories, saw the biggest M&A deals during the nine-month period of Q1–Q3 2021, when compared to the same period in the pandemic-stricken 2020.

North America, Europe and the APAC area excluding China reported an increase in deal volume in Q3 2021, when compared to Q2 of this year. 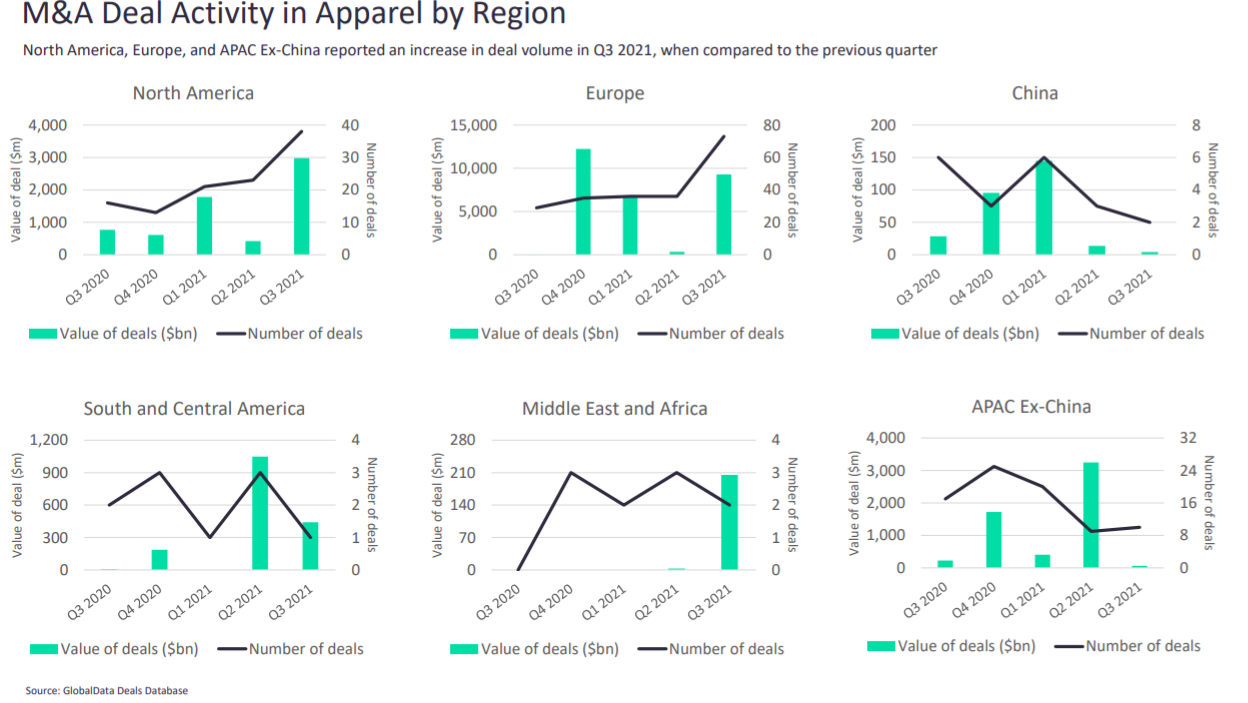 “M&A activity in the apparel sector has accelerated since the pandemic, as brands which were failing to keep up with changing consumer trends became even more vulnerable and required help to survive,” says Chloe Collins, Head of Apparel research and analysis for GlobalData.

“However, as the sector rebounds, mergers and acquisitions are being used by companies as a way of diversifying their customer bases and entering the market for new product categories, both of which create growth opportunities.

“For example, in August, US footwear group Wolverine purchased Sweaty Betty for $410m, expanding their portfolio to include sportswear, a category which continues to outshine thanks to the athleisure and casualisation trend, while JD Sports bought a stake in Hairburst to allow it to enter the Health & Beauty market.

“In September, Next entered a joint venture with Gap to manage its UK business, enabling Gap to benefit from Next’s digital expertise, and allowing Next to gain new traction from Gap’s existing UK customers.”

Also driving apparel trends in GlobalData’s view was the theme of strategic partnerships.

Strategic partnerships are an arrangement between two companies to help each other or work together towards a shared objective, as shown by ABG Group’s $2.5bn acquisition of Reebok from Adidas in August.

The changing nature of shopping, as customers move online for their purchases, will lead to increased importance of these partnerships, both with other apparel companies and suppliers. This will help to make businesses more efficient and will help them save on costs, thus bolstering profits.

GlobalData reports M&A deal volume for the global ADS sector in Q3 2021 increased to 70 from 65 in the previous quarter. A sharp increase was also recorded in deal value, where Q3 2021 recorded deals worth $29bn, compared to $2bn in Q2 2021.

There were five billion-dollar-plus M&A deals in the ADS sector in Q3 2021, compared to none in the previous quarter.

Domestic deals dominated ADS M&A activity in volume terms in Q3 2021 with 41 deals. M&A deal value and volume for both domestic and cross-border M&A recorded an increase in Q3 2021, when compared to the previous quarter. 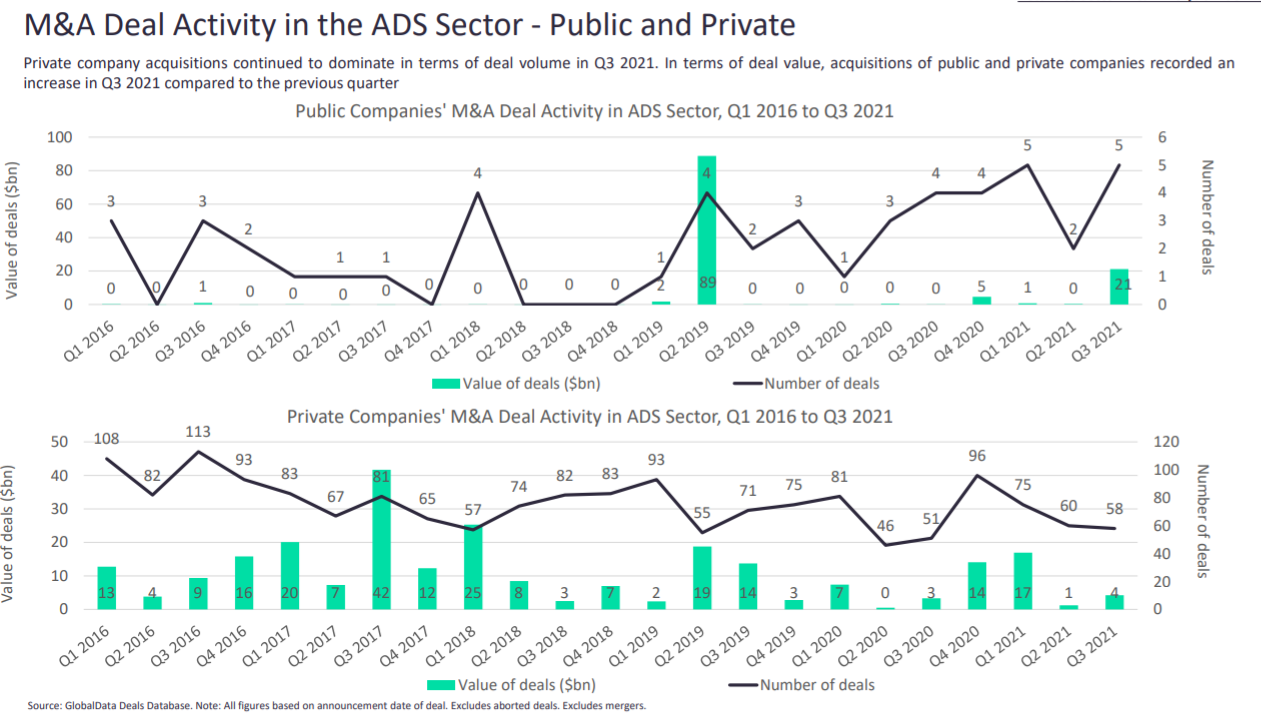 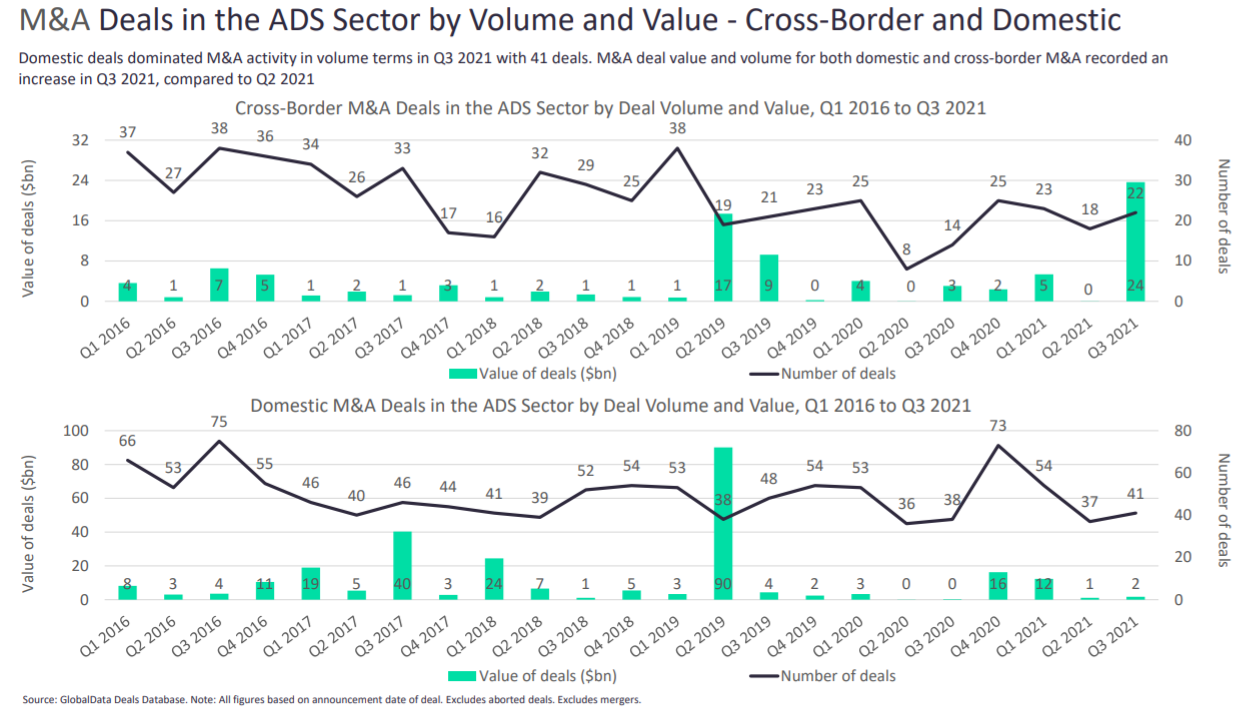 Command, Control, Communications, Computers and Intelligence, Surveillance and Reconnaissance (C4ISR) recorded the highest M&A deal value of $28bn in Q1–Q3 2021, along with electronic warfare. In terms of deal volume, the aerospace sub-sector recorded 53 deals, the highest in the entire ADS sector in the nine-month rolling period in 2021.

North America and Europe reported a quarter-on-quarter (QOQ) increase in deal value of 210% and 2,331%, respectively, in the third quarter. 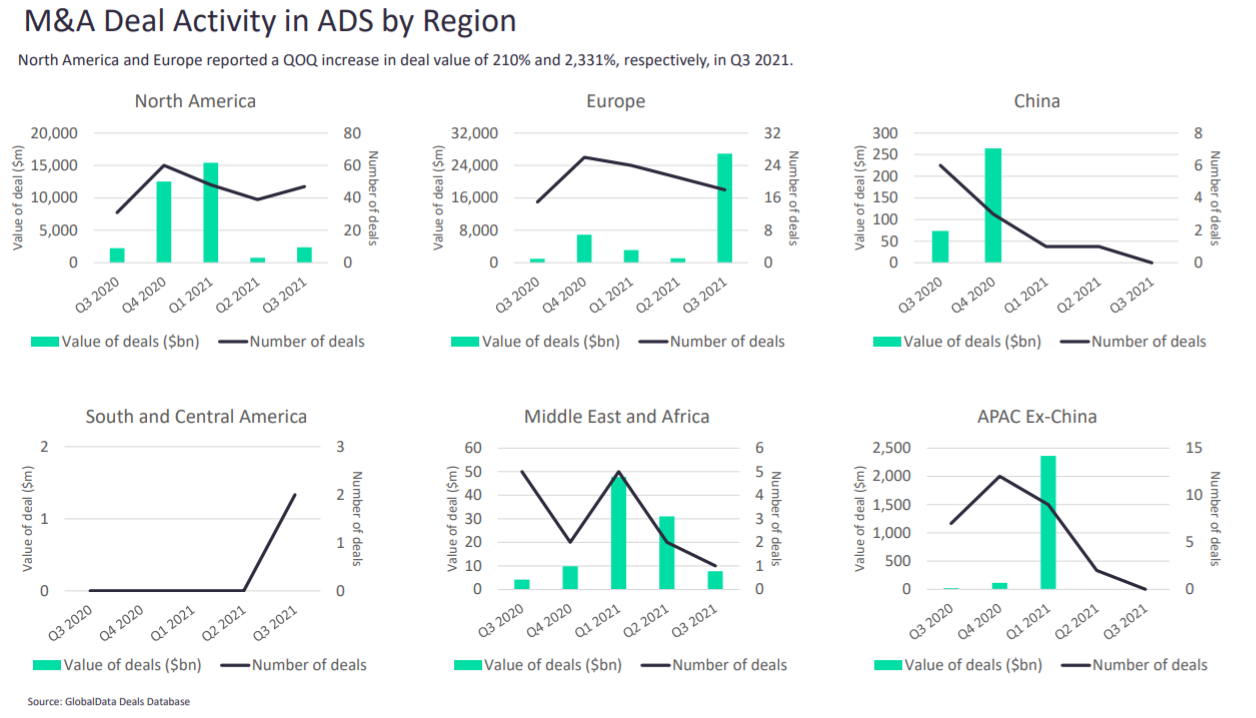 The top thematic trends for ADS this last quarter include electric aircraft, with iSTAR’s acquisition of ALTI being the biggest among M&A deals in ADS.

iSTAR, a subsidiary of Israeli home security services provider Avnon Group, acquired ALTI, a South Africa-based UAV manufacturer specializing in vertical take-off and landing drones. As reported by the GlobalData deals database, the deal went down for $7.75m in August.

As GlobalData reports, technological advances in recent years have made the development of electric aircraft increasingly viable even if, as Verdict reported in the summer, your electric car isn’t quite ready yet.

“Lithium-ion batteries may be able to offer sufficient energy to allow electric aircraft to compete with conventionally powered aircraft in some sectors,” reports GlobalData. “The benefits of and applications of electric aircraft are myriad. From cleaner commercial aviation, to air taxis, to high-speed broadband, and even to space launches, a wide range of electronic aircraft are being developed. They have the potential to change several aspects of twenty-first century life.”

“Timely and accurate intelligence and communication is the lifeblood of military operations, and space-based capability is essential,” adds GlobalData.

“The commercialization of space is a key driver in the contemporary space systems market, with technological advances not only improving the capabilities of satellites but reducing costs throughout the supply chain.

“It is likely that space will increasingly become a theatre in which contests are fought between commercial adversaries.”

The top two deals in the space sector this quarter were Hanwha Systems’ stake acquisition in OneWeb, and the merger of Virgin Orbit with NextGen Acquisition Corp II.

Also in August, space solutions company Virgin Orbit merged with NextGen Acquisition Corp II, a special purpose acquisition company (SPAC). Virgin Orbit provides launch services for small satellites and “Satellites-as-a-Service” The aim of the merger is for Virgin Orbit to become a publicly traded company. The deal was worth $483m.

All regions except Middle East and Africa reported an increase in deal volume in Q3 2021 compared to the previous quarter. 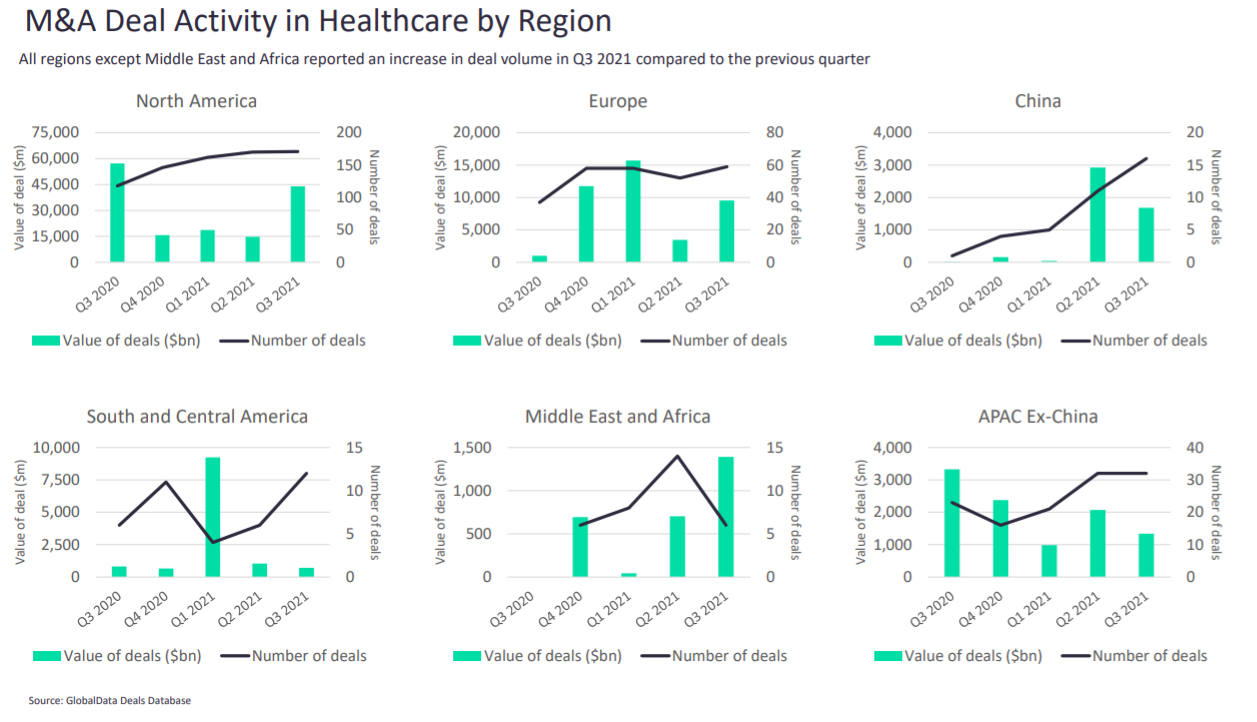 Out of the 18 sectors profiled by GlobalData, healthcare was the third biggest sector with regards to M&A deals.

“The deals in healthcare outdoing other sectors is not terribly surprising at this point,” comments David Brown, senior thematic analyst for GlobalData.

“Covid-19 has pushed healthcare systems to their limits for the last two years, and as such healthcare providers have had no choice but to increase their digital footprint and enhance their operational flexibility/efficiency. This means they have had to turn to technology implementation. This has led to deal making in the healthcare IT subsector.

“Additionally, with healthcare providers recovering from the Covid-19 hit, we are seeing two tiers of recovery. Some providers (tending to be smaller) are still having a lot of operational and financial troubles due to the pandemic, while other providers (tending to be the larger health systems) are posting record profits. This lopsided pressure has led to provider consolidation, especially in the US.”

A key theme behind healthcare M&A activity is patient access to healthcare. As GlobalData writes, “technological improvements typically require highly developed infrastructure and tend to be difficult to bring to entire populations. For healthcare systems to be effective, they need to serve entire communities across diverse circumstances.”

Reinsurance unit Brookfield’s purchase of American National for $5.1bn is the key deal highlighted by researchers in the theme.

Running out of gas? 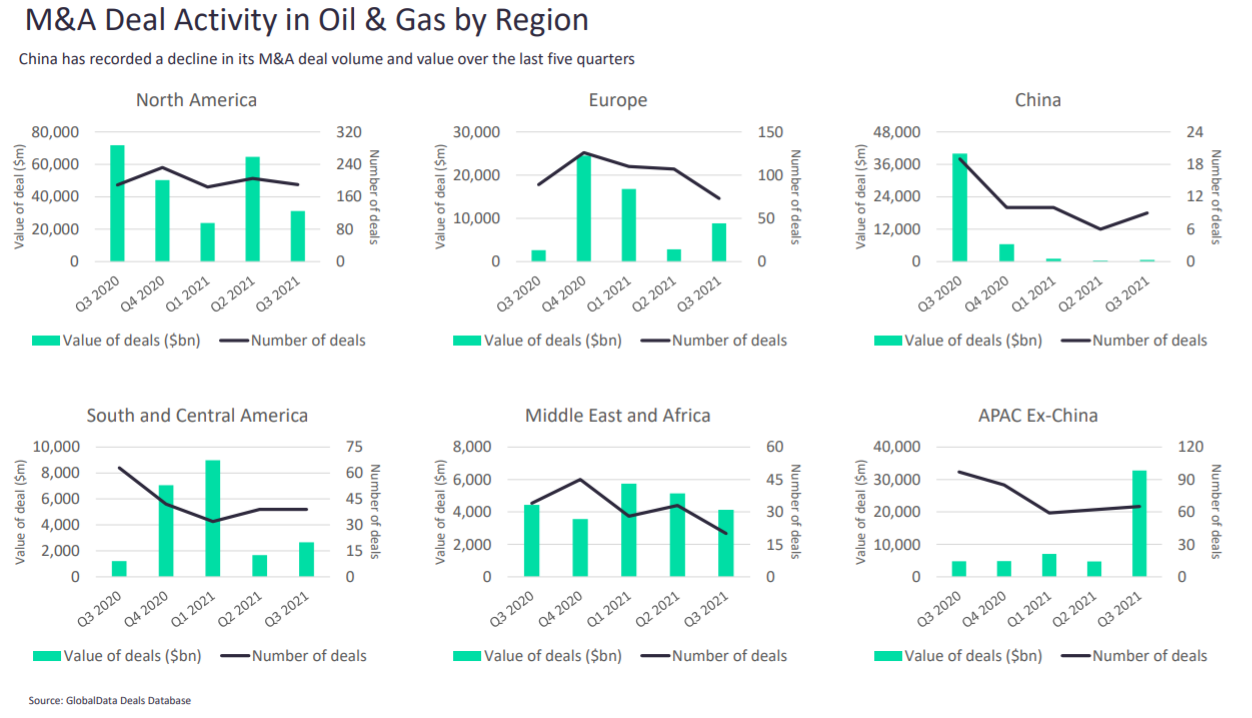 “In the last few years, the deal value and volume has been generally driven by the US shales, where companies have traded assets more frequently, firstly to increase their position in core acreages, secondly to decrease position in non-core/high-breakeven acreages and lastly to pay off debts,” lists Ravindra Jayant Puranik, GlobalData’s associate project manager for oil and gas research.

“The change in government in the US this year has brought about some uncertainty in the country’s oil and gas industry. It might have some bearing on the M&A trend in the US shales, and hence on the global deal value/volume as well.

“Also, recent improvement in oil prices and also valuations of shale drillers (both distressed and cash-rich) also may have played a part in discouraging M&As in the recent quarter.”

Finally, a surprising winner in Q3 is the travel and tourism industry. While the world may have exited lockdown slowly and unevenly in 2021, the travel sector saw a 356% increase in deal value this past quarter, with only a 4% drop in deal volume compared to Q3 2020.

The travel & tourism sector recorded the biggest deal in Q3, with the Canadian Pacific Railway acquisition of Kansas City Southern for $27.2bn in September. As reported by sister site Railway Technology, the combination of railroads will cover nearly 32,186km of rail, creating the first single-line rail network connecting the US, Mexico and Canada. 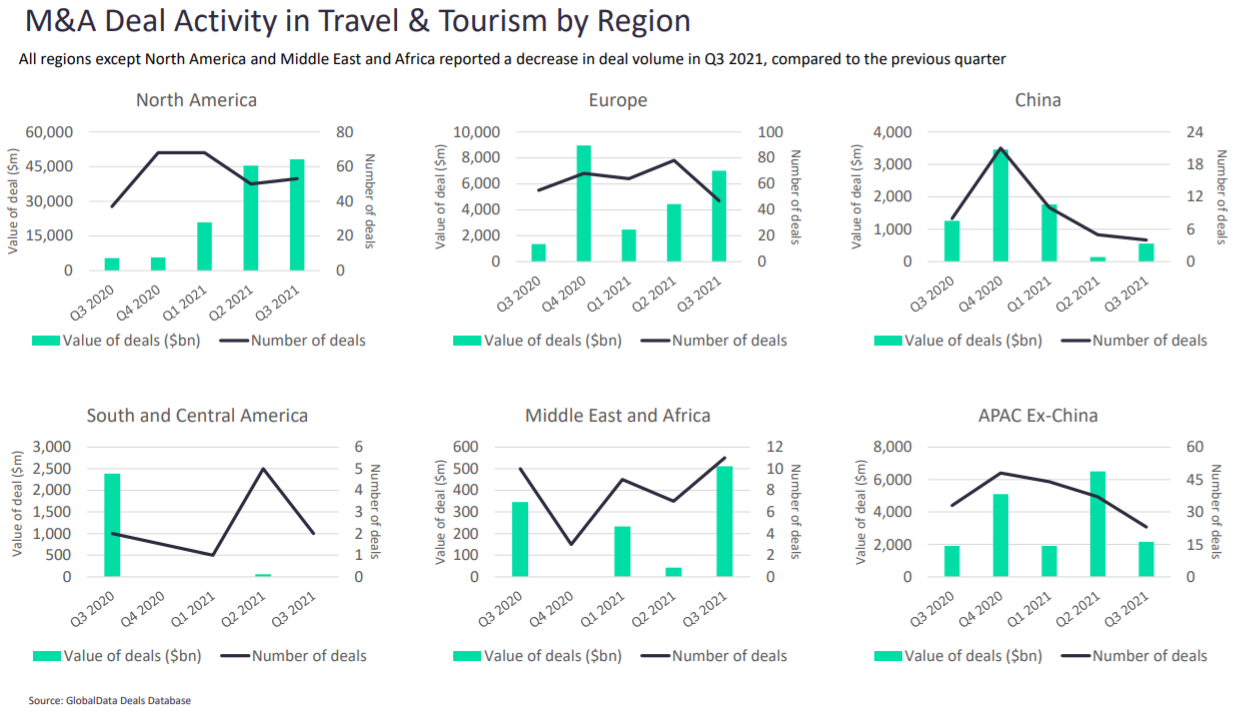 “The travel and tourism industry is starting to open up on a global scale, without progress being heavily impacted by spikes in infection rates, which it previously was,” reports Ralph Hollister, associate thematic analyst at GlobalData.

“Previous waves of infections across the globe caused blanket travel restrictions to be imposed, and thus greater barriers to travel. Now we tend to just be seeing restrictions between specific countries due to increased confidence from governments created by successful vaccine rollouts.

“In conclusion, improving economic conditions, solid vaccinations rates, a stiff decrease in travel restrictions, and increased traveller confidence in many important source markets are likely to be the factors behind enhanced M&A confidence in the travel and tourism space.”

It remains to be seen whether the Omicron virus variant will spoil the party during the rest of the current fourth quarter. Until then, the biggest M&A deals show a world opening up as more of us go sightseeing in style.

Find out about the biggest M&A deals across 18 sectors in the GlobalData report, Global M&A Deals in Q3 2021 - Top Themes by Sector.