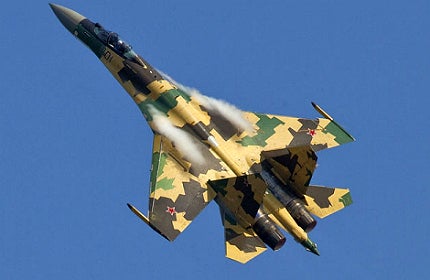 The US Air Force’s entire fleet of F-22 Raptor aircraft was grounded in 2011 due to suspected toxins in the cockpit, a report compiled by Pentagon chief operational tester Michael Gilmore revealed.

The report cited "suspected contamination problems associated with the aircraft environmental control system and associated onboard oxygen generation system (OBOGS)" as the reason for the grounding, triggered by a crash in January 2011 that barred the aircraft from flying higher than 25,000ft.

The US Air Force’s other fifth-generation aircraft, the F-35, edged closer to operational fielding with the successful completion of its first night flight after taking off from Edwards Air Force Base in California, US.

A quiet month for air force news was capped by the revelation that Japan may be forced to halt purchases of the F-35 fighter if the US raised its price tag.

In a letter addressed to the Pentagon, Japanese Defence Ministry bureau of finance and equipment chief Hideshi Tokuchi said: "I do hope that you share the view that a price increase is not an option for us."

However the US defense budget for 2013 placed the price of the aircraft for the US military at approximately $153m.

A lack of federal funding forced the Pentagon to mothball a laser-equipped missile defence aircraft at Arizona Air Force Base, but the US Missile Defense Agency confirmed that research into anti-missile lasers would continue.

MDA spokeswoman Debra Christman told the Los Angeles Times: "We didn’t have the funding to continue flying the aircraft."

The Lockheed Martin-developed system has been tasked to track orbiting satellites and debris, with the information used to protect US interests in geostationary orbit.

The USAF’s Scientific Advisory Board failed to determine the cause of physiological events experienced by pilots flying F-22 Raptor aircraft that prevented the aircraft from flying above 25,000ft.

Pilots reported hypoxia-like symptoms while flying the aircraft, but a seven-month study of the F-22’s onboard oxygen generation symptoms did not yield any significant reason why, with ten of 14 incidents remaining unexplained.

In other news, the UK Royal Air Force’s first F-35 completed its inaugural flight from Lockheed Martin’s Fort Worth facility, marking progress towards a series of checkout flights prior to being accepted by the UK MoD.

Counterfeit Chinese electronic parts were revealed to have been used in the construction of US military equipment, a Senate Armed Services Committee report revealed.

An investigation uncovered 1,800 instances of aircraft using counterfeit parts, with Chinese suppliers responsible for more than 70% of an estimated one million suspected components.

In other news, the UK coalition government completed a sensational U-turn, reverting to the F-35 variant originally chosen by the Labour Party.

Prime Minister David Cameron had intended to switch from the F-35B to F-35C to be used aboard the nation’s aircraft carriers, but spiraling costs and delays forced the decision to be reverted. The U-turn is estimated to have cost the UK £100m.

Turkish Foreign Minister Ahmet Davutoglu claimed the fighter was flying inside international airspace at the time of the shooting, a claim rebuked by Syria.

Elsewhere, Russian Prime Minister Dmitry Medvedev confirmed that the country’s plans to develop a fifth-generation strategic bomber would move ahead, citing the need for an upgrade to Russia’s strategic bomber fleet.

The development of such an aircraft had been placed in doubt by some who questioned the need for it with the availability of modern air defence systems.

The Syrian civil war escalated further, as reports suggested that the nation’s second city of Aleppo was bombed by fighter jets, with President Bashar al-Assad attempting to quell the rebel uprising.

The attack marked the first time such aircraft were used during the conflict, with the BBC reporting that Russian-built MiG-23 aircraft were responsible for the attack.

The attack came just weeks after Russia confirmed it would renege on a deal under which Syria were to receive 40 Russia-built Yak-130 fighter jets.

Russian news agency RIA quoted deputy director of the Russian service for military co-operation Vyacheslav Dzirkaln as saying "while the situation in Syria is unstable, there will be no new deliveries of arms there."

Having issued a $4bn lawsuit to Russia, Iranian ambassador to Russia Mahmoud-Reza Sajjadi announced that the country would withdraw it should Russia honour its original S-300 SAM system delivery contract, signed in 2007.

Russia was forced to cancel the lucrative deal after it was found to breach a UN Security Council arms embargo forced on Iran in June 2010, despite Iranian claims to the contrary.

In other news, the USAF’s test of the Boeing-built X-51A Waverider aircraft ended in failure, raising further questions about the future of the programme.

Despite hoping to reach hypersonic speeds, the USAF has just one hypersonic test aircraft remaining and doubts have been expressed regarding the feasibility of the technology.

A quiet month allowed Sukhoi to steal the headlines, as it revealed the successful test flight of its Su-30SM fighter jet, developed for the Russian Air Force.

The test flight lasted for two hours and the super-manoeuvrable, thrust-vectoring aircraft was said to have performed flawlessly.

A total of 30 fighters have been ordered by the Russian Defence Ministry in a $3.3bn deal signed in March 2012.

In something of a surprise move, the US Government tasked Lockheed Martin with upgrading 145 F-16 fighter jets that belong to the Republic of China Air Force.

The USAF also moved to confirm that it would press ahead with the X-51A Waverider programme, with Air Force Research Laboratory programme manager Charlie Brink informing Reuters that the launch of the final X-51A test vehicle would go ahead in spring or early summer 2013, after modifications had been made.

Israel test-fired an upgraded version of its Iron Dome anti-rocket defence system, just days before an escalation in the nation’s conflict with Gaza that left the region teetering on the brink of war.

The upgrade, designed to boost the system’s performance, saw deployed Iron Dome batteries achieve success rates of 90-100% in combating rockets fired from Gaza during the escalation.

In other news, Russia announced a deal under which China will receive 24 Su-35 fighters for its People’s Liberation Army Air Force, with a $1.5bn contract expected to be signed in 2013 or 2014.

The announcement renewed a deal that had previously seemed dead, with Russia accusing China or reverse engineering during the development of its J-11B aircraft.

Despite warnings that any such launch would increase tensions within the region, North Korea pressed ahead and successfully launched its three-stage Kwangmyongsong-3 rocket, with opposition governments claiming it to be a test of long-range missile technology.

Debris from the launch fell into the Yellow Sea and Philippine Sea, with South Korean forces managing to salvage some of the debris for testing.

Japan had pledged to shoot down the rocket should it threaten the nation’s security, a threat echoed by South Korea.