The latest of the US military’s X-51A WaveRider has failed, sparking increased speculation regarding the future of the programme. The second successive failure, which occurred on 14 August 2012 as the aircraft sought to reach Mach 6, resulted in the jet breaking apart before ditching into the Pacific Ocean north-west of Los Angeles.

The US moved quickly to confirm the WaveRider’s failure, announcing the results of the test little more than 24 hours after the failed test. Attempts to fly the jet at Mach 6, approximately 3,600mph, were unsuccessful due to a faulty control fin which prevented it from starting its scramjet engine.

Having intended for the aircraft to fly at maximum speed for around five minutes, an error was identified after just 16 seconds when the jet’s rocket booster was triggered to increase its velocity towards hypersonic flight. The WaveRider subsequently lost control, breaking apart before falling into the Pacific Ocean.

Speeds of Mach 6 would see the aircraft capable of flying from London to New York in approximately an hour. Image courtesy of Boeing.

US Air Force Research Laboratory spokesman Charlie Brink said, "It is unfortunate that a problem with this subsystem caused a termination before we could light the scramjet engine. All our data showed we had created the right conditions for engine ignition and we were very hopeful to meet our test objectives."

Scramjets need to operate in specific conditions because the combustion needed to power the aircraft occurs in supersonic airflow. The aircraft does not need onboard liquid oxygen to create thrust, as oxygen is absorbed from the surrounding atmosphere. Oxygen is compressed and decelerated prior to combustion, with supersonic airflow taking place throughout the entire engine.

Initial theoretical projections placed the maximum speed of scramjet propulsion to between Mach 12 and Mach 24, exciting the Prompt Global Strike department of the US military that has been tasked with identifying technology capable of striking anywhere in the world within an hour without "going nuclear".

This test failure will come as a blow for the US military, but it has not effectively ended hopes of achieving such speeds. Both failures have been the cause of equipment failures, with the first test failing after the WaveRider was unable to restart its engine after flying at Mach 5 for around three minutes. 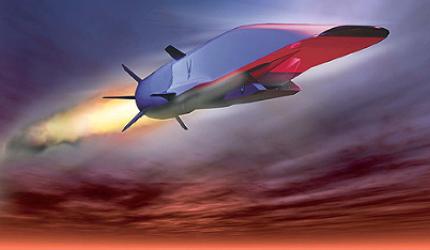 A concept image of the X-51A WaveRider mid-flight. Image courtesy of Boeing.

Although the vehicles have all been intended to ditch into the ocean after use, this new failure leaves the US Air Force with just one X-51A WaveRider in its inventory, and the USAF is yet to decide whether or not to organise a fourth test.

Given the foreseeable benefits of the scramjet engine, however, it is unlikely that the US military will scrap the continued development of the technology on the back of successive test failures. The ability of hypersonic missiles to evade current missile defence technology would present a huge advantage to their operators, providing them with the capability to strike against high-priority targets in spite of defensive measures.

Proving the technology is also likely to have an enormous impact on commercial flight, as travelling at speeds of Mach 6 would make drastic cuts to travel times. Travel from London to New York could be achieved in around an hour, while New York to Tokyo could take as little as two and a half hours. European aerospace manufacturer EADS has already expressed an explicit interest in developing a hypersonic commercial aircraft.