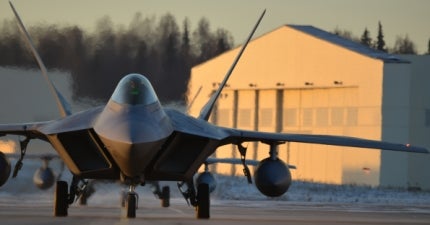 Stealth aircraft have become the cornerstone of the US Air Force’s fighter fleet. As the F-16s and F-15s edge closer to retirement, they stand to be replaced in action by the technically superior but expensively developed F-22 and F-35 fighter aircraft, forming an all-stealth fleet that enemy forces struggle to detect. Despite their operational benefits, the F-35’s extravagant price tag, now estimated to exceed $1tn, has proven to be quite the attraction for detraction.

"The US Department of Defence has been forced to seek more bang for its bucks in the face of sweeping austerity measures."

As Lockheed Martin’s aircraft continues to progress towards operational service, those who remain unconvinced by its purported superiority continue to point towards its reported defeat by Russian-built Su-35 fighter aircraft in battle simulations.

The USAF will be well accustomed to mud-slinging from external sources by now, but it probably isn’t used to such criticism from a familiar source. This is, however, exactly what senior decision makers are facing. Former F-22 test pilot Lt. Col. Christopher Niemi has publicly voiced his opinions on what he perceives to be a wrongful pursuit of an all-stealth fleet comprising of F-35 and F-22 fighters that flatter to deceive.

Niemi claims the USAF’s pursuit of an all-stealth fleet, and the capability trade-off required to accommodate the technology, to be profligate, ineffective and ill-suited to the demands of modern conflicts, such as those waged in Afghanistan, Iraq and Libya. The US Department of Defence has been forced to seek more bang for its bucks in the face of sweeping austerity measures, and with designers already looking toward sixth-generation fighters, debate rages as to whether stealth has much of a future at all.

Stealth not worth the trade-off

Stealth aircraft are designed in such a way that weapon sorties must be forced inside the hull of the aircraft and encased in radar-deflecting materials to reduce the aircraft’s radar signature. This means that not only do stealth aircraft carry fewer weapons, but they’re also of limited firepower. While a stealth fighter may be able to penetrate through advanced air defence systems, the damage they could do is reduced.

Stealth does, however, remain a worthwhile attribute. While it cannot render an aircraft completely invisible, it makes them more difficult to identify. Moreover, stealth is a vital component of US air superiority and a wealth of reports allege it to be required in greater numbers than currently offered.

One such report, published by the American Enterprise Institute (AEI) in May 2012, found that the F-22 fighter and B-2 bomber are the only aircraft of the US Air Force capable of penetrating China’s sophisticated air defences, while they would also be required to circumvent North Korea’s defences in the event of an airstrike. "With only 185 F-22s and 20 B-2s, the United States has an extremely limited number of stealth aircraft that could participate in the first-wave assault," says the study, emphasising the importance of the F-35’s entrance into service.

The first pre-production F-35 inside its hangar. Image courtesy of the US Department of Defense.

While the conclusion of the AEI study was to recommend continued support of the F-35 programme, also highlighted was the need to address issues relating to its range. Incorporating stealth has also led to a decrease of the aircraft’s range, placing a new importance on the procurement of KC-46 tankers.

"The F-35’s extravagant price tag, now estimated to exceed $1tn, has proven to be quite the attraction for detraction."

The study highlights a key example stating that, should a wing of 72 F-22 fighters be based 1,500 nautical miles away, the approximate distance between Anderson Air Force Base in Guam to the South China Sea, only six aircraft could be kept over the battle area at any given time.

KC-46 tankers, however, would be futile in such an environment given their propensity to become sitting ducks in combat. The report has responded by calling for increased investment in "long-range, low-observable, carrier-based strike platforms," a description that neither the F-22 nor F-35 can fit, with Lockheed Martin’s carrier variants lacking the desired range to strike at such distances.

With the F-35 still in testing and the F-22 yet to see operational combat, it remains to be seen how effective the aircraft can be if placed into such a situation. The F-22 was originally designed to combat threats emanating from the Soviet Union, and Niemi remains highly critical of the USAF’s inability to redesign and retool the aircraft to compensate for the way in which opposition forces have become the less sophisticated foes in Afghanistan, Iraq and Libya. Borne out of Cold War-era hysteria, the F-22 finds itself almost out of place in the modern theatre, but could yet prove effective in perceived future conflicts in Iran or North Korea.

With stealth irrefutably a technology that the USAF is likely to require in the future, a keener eye should be placed on the balance of combining stealthier aircraft with those more capable of packing a punch. The extravagant price tag attached to stealth aircraft has forced the US to rethink fleet sizes, with Niemi arguing that this has resulted in dangerously small numbers.

Whereas the 187 F-22 jets ordered to date have set back the US DOD around $70.5bn, the entire cost of the F-35 programme is set to exceed $1tn, an inordinate sum given the current fiscal environment. A proposed solution, backed by the likes of USAF general Henry Wyatt, includes upgrading older aircraft in order to maintain squad numbers after the imminent retiring of thousands of F-15s, F-16s and A10s.

Decision makers are reluctant to pursue such a strategy, citing such a move as being a "direct threat" to fifth generation fighter programmes. That attitude could be seen as attaching a "too big to fail" title on the F-35 programme, an accusation that has also been levied at US Navy decisions made to acquire LCS vessels.

While the F-35 and F-22 do propose to fulfil a number of capability gaps and offer air superiority to the US in certain mission profiles, criticism is understandable given the needs of the air force in recent and ongoing conflicts. Stealth is indisputably a key attribute for any air force, but doubts will remain over whether or not it should be pursued to the extent it has been. An answer perhaps lies in a compromise, enabling the acquisition of limited upgraded aircraft to compliment, rather than endanger, the future procurement of stealth fighters.

What future does stealth have?

In spite of the criticism the US does, however, remain confident that the obsolescence of stealth will not become an issue for its aircraft. Senior officials have reaffirmed their belief that adversary efforts to nullify stealth equipment are inadequate in comparison to US technology.

"Stealth aircraft are designed in such a way that weapon sorties must be forced inside the hull of the aircraft and encased."

Speaking at the Center for Strategic and International Studies, US Air Combat Command commander General Mike Hostage said: "Our adversaries are building capabilities to see stealth airplanes, but not at any faster rate than we’re developing abilities to remain, not invisible, but able to deal with the relative visibility and invisibility."

Other technology drives relating to stealth technology relate to how easy it is to produce and maintain. The defining case for such a shift is Lockheed Martin’s F-35, the fifth-generation fighter of choice for the US and most of Europe. Through its design, the F-35 will be much easier to sustain than other generations of low-observable fighters, but at more expense in comparison to non-stealth aircraft.

What has been noted, however, is that stealth is unlikely to be the defining technology of future generations of fighters. While stealth became the definitive hallmark of the fifth-generation F-35, sixth-generation aircraft, pencilled in for 2030 onwards, will not see much of a development of this capability, says Hostage. Presolicitation for the generation, released by the US Air Force in November 2010, called for enhanced reach, survivability and human-system integration, with mooted technologies including self-healing structures and laser weaponry. "It’ll be some type of game-changing capability," says Hostage.

Pre-emptive strike: how the US could neutralise Iran

Should Iran continue to ignore threats regarding its nuclear programme, just how could the US neutralise the nation?

Aircraft of the Syrian Air Force: from Russia, with weaponry

International condemnation of Russia’s arming of Syria has increased in tandem with the nation’s violence.

The Future of Disruptive Tech Themes in Defense