With technology incorporated aboard next generation military aircraft increasing to unprecedented levels, it has become almost imperative that pilots are well versed in the layout and workings of an aircraft before even venturing inside the cockpit. Coupled with the spiralling cost of individual aircraft, simulation technology capable of providing trainee pilots with an ample flight education has taken on a new importance.

Advancements in projection technology and visual systems have led to the development of ‘fully immersive’ training environments, whereas the use of actual components seen onboard next generation aircraft are providing trainee pilots with the kind of familiarity necessary for a seamless integration into their designated aircraft.

"Simulation technology capable of providing trainee pilots with an ample flight education has taken on a new importance."

The simulators, which are delivered in Block 40/42 and 50/52 configurations, can support the development of pilots in advanced pilot mission training, tactics validation and mission rehearsal. Simulators using L-3’s Simusphere technology are installed across US facilities in order to train pilots for F-16 missions in the US, Europe and Pacific regions.

Whereas the F-16 fighters have been a staple of the US Air Force since their introduction in 1978, Air Forces are progressively looking further forward in order to fulfil their mission requirements in terms of pilot training. In order to complete this, a new raft of flight simulators for fifth generation aircraft is currently in production. 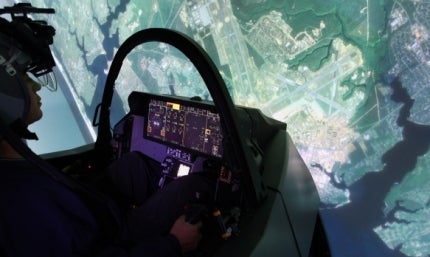 With the air forces of the US, UK, Italy, France, Australia, Canada, Netherlands, Norway, Turkey, Israel and Japan building their capabilities around the Lockheed Martin-built F-35, and with a unit cost of between $197m and $236.8m depending on the choice of model, it is worth having a vested interest in ensuring that any pilot stepping into the cockpit has the best possible training available.

"The reconfigurable cockpit is a key element of the FMS, allowing the one simulator to replicate the conditions of all three F-35 variations."

To achieve this, Lockheed Martin has delivered a complete F-35 Full Mission Simulator (FMS), a complete flight simulator that combines a high-fidelity, 360 degree visual display system with a reconfigurable cockpit in order to produce an entirely realistic reconstruction of the actual F-35 cockpit. For added realism, the FMS uses actual aircraft software that is to be used aboard in-service F-35s and replicates all F-35 sensors and weapon deployment systems.

"The smooth surface, high-resolution dome is a dramatic improvement over legacy fighter simulators. The high visual acuity and utilization of a significant amount of real aircraft parts and source code will allow us to train a wide variety of mission tasks previously not accomplished in simulators. The F-35 FMS will be our primary pilot training device, and we are anxious to start putting it to good use," added Tomassetti, speaking after receiving the first FMS last year, 2011.

The reconfigurable cockpit is a key element of the FMS, allowing the one simulator to replicate the conditions of all three F-35 variations that are currently being produced. In replicating these conditions, air forces set to take delivery of multiple variants can train pilots in the same simulator, rather than ordering multiple simulators, significantly reducing training expenditure.

While flight simulators for next generation fighter jets may steal the headlines, helicopters are notoriously more difficult to pilot than jets, and there is now a complete training platform available for not just helicopter pilots, but also crew.

A helicopter simulator for the HH-60G Pave Hawk personnel recovery helicopter, due to come into service in April 2012, has been developed in order to train pilots, gunners and engineers. The ‘Super 60’ simulator is the first such simulator to encompass aerial gunner stations on the simulator platform, allowing gunners to train alongside and experience the exact same flight motions as the flight crew.

The system consists of three domes, three image generations and 19 projectors, with one dome for pilots and two domes for the gunner and onboard flight engineer. Capable of modelling electronic warfare and defensive systems, the simulator allows crew members to practice alternative combat scenarios, such as combat search and rescue missions, aerial refuelling and night vision operations.

The simulator, developed by Lockheed Martin, comes as part of the company’s ten-year, $1.1bn Aircrew Training and Rehearsal Support (ATARS) II contract, signed in 2007, succeeding the previous ATARS contract that ran from 1987.

"Owings also promoted use of hand-held devices, such as iPads, being explored, with voice command control-enabled UAVs highlighted as the ‘next big thing’."

The landscape of aircraft simulation and training could be on the precipice of a polar shift, however. As of 2005, five percent of military aircraft in Iraq and Afghanistan were UAVs, increasing dramatically to 33% as of 2011. This widespread use of UAVs to fulfil new and emerging mission capabilities is only predicted to increase further, with small UAVs like the Raven earmarked for reconnaissance missions.

Speaking at the 23rd annual symposium of the Association for Unmanned Vehicle Systems International (AUVSI), AUVSI board of directors member Tim Owings spoke of the increasing use of UAVs in combat zones, and how they are beginning to shape the changing face of aircraft training.

While the Program Management Office for UAVs is insisting on the streamlined operation of unmanned systems, using fewer personnel for ground control of the vehicles; Owings echoed this message by outlining the need for UAV operators to be well versed in the operation of multiple UAVs, not just one. "We have to fly more vehicles, more hours with fewer people," added Owings.

He also spoke of the considerable success the US Army has had through using teenagers as operators due to their experience of playing video games, leaving them well equipped due to similarities between operating technology and the controls of the game itself.

Owings also promoted use of hand-held devices, such as iPads, being explored, with voice command control-enabled UAVs highlighted as the ‘next big thing’ in unmanned vehicle technology, with UAVs essentially given the technology to fly themselves and staying obedient to a handful of active commands, distinctly similar to new developments by DARPA on Boston Dynamics’ AlphaDog robot.