Like many Chinese military programmes, details of the Shenlong (Divine Dragon) Space Plane are impossible to confirm, and any details of test flights that have emerged have been recorded and surmised mainly by amateur observers and disseminated via social media channels.

The US is historically more open about its space programmes, but X-37B seems to be an exception. Manufacturer Boeing remains tight-lipped over the classified programme, releasing only information about the launches but no details of what took place in flight and only an enigmatic flavour of the programme’s overarching purpose.

“The X-37B programme is demonstrating a reliable, reusable unmanned space test platform for the air force,” the company says.

Not since the Cold War have such levels of speculation been generated about secretive rival programmes, but by examining the limited available facts and taking the available expert analysis and amateur conjecture with a healthy pinch of salt, some picture of what both programmes involve may be deduced.

Technology and test flights of Shenlong  and X-37B

Boeing announced on 12 December 2012 that an Atlas V rocket launched OTV-1, the first of two vehicles developed for the programme, into a low Earth orbit from Cape Canaveral Launch Complex 41. The third launch in the programme and the second for OTV-1, it successfully demonstrated the reusability of the platform.

“Not since the Cold War have such levels of speculation been generated about secretive rival programmes.”

OTV-1 was first launched in April 2010, returning from space and landing independently that December, the first US unmanned vehicle to do so. A second vehicle, OTV-2, launched in March 2011 and was originally destined to stay in orbit for 270 days, but due to the success of the mission, the US Air Force decided to extend its duration to 469 days.

This set a new record for the flight duration of a reusable space vehicle, an honour previously held by Space Shuttle Discovery which accumulated 365 days in orbit.

The X-37B stands 2.9m tall on the runway and is 8.9m long, with a 4.5m wingspan and weight of nearly 5,000kg. It travels in a low Earth orbit at 28,044km/h, which is made possible in space by using gallium arsenide solar cells with lithium-ion batteries. Plans are already in place for a larger model, the X-37C.

Chinese media announced that the first sub-orbital flight of the Shenlong space plane from an H-6 bomber just one month after OTV-1 returned from its first test flight, on 8 January 2011. Official reports disappeared soon afterwards, but social media and amateur footage still circulates, including rumours that the programme lead is Wang Chung of the AVIC Chengdu Aircraft Design and Research Institute.

All Shenlong specifications that have been published have been estimated by observers and vary considerably. It appears to be about one metre high and up to 5.8m long, and is likely to be launched into orbit by a Long March booster. However, it could be a sub-scale model, and may even be a test bed for a future manned space-shuttle type vehicle to transport astronauts to the Chinese space station and laboratory Tiangong-1, or Heavenly Palace, which launched in September 2011.

With Boeing and the US Air Force remaining secretive about exactly what technology based on the X-37B might eventually be used for, the public rumour mill has been hard at work churning out theories.

At first amateur astronomers tracking the X-37B’s flight path suggested that it seemed to closely match that of Tiangong-1. Some suggested that it may be designed to carry a fleet of novel sensors that could spy on China, or even carry out space-to-space espionage to see what rival satellites were doing.

“At first amateur astronomers tracking the X-37B’s flight path suggested that it seemed to closely match that of Tiangong-1.”

However, Brian Weeden, former USAF orbital analyst and technical adviser to the Secure World Foundation, told the BBC in January 2012 that its orbit was unsuitable for a spy satellite and only intersected briefly with that of the Chinese space station.

“A typical spy satellite is in a polar orbit, which gives you access to the whole Earth,” Weeden said. “The X-37B is in a much lower inclination, which means it can only see a very narrow band of latitudes, and the only thing that’s of real interest in that band is the Middle East and Afghanistan.”

China’s state-run media is understandably more suspicious of the USAF’s intent. Shortly after OTV-2 landed, the Xinhua media agency stated: “Industry analysts said the spacecraft could be a precursor to an orbiting weapon, capable of dropping bombs or disabling enemy satellites as it circles the globe.”

China’s Shenlong space plane may be a direct response, attempting to replicate the mission it fears X-37B has been designed for, or the similarity might end with the reusable space-plane design and it could even be an early prototype for a future manned space shuttle.

Though the exact missions of the Shenlong and X-37B programmes are unlikely to come to light in the immediate future, an underlining driver may be the key to the investment by each country – a Cold War-style tit-for-tat space race for technological superiority.

The final flight of the US Space Shuttle fleet in July 2011 was a bitter blow to US space ambitions, and severe spending cuts put the kibosh on near-future plans for manned space exploration.

An unmanned reusable platform would be one way for the superpower to maintain its space superiority and research edge while keeping a rein on spending.

China’s defence industry has been rapidly closing the gap in the time it takes to produce military technology in response to US breakthroughs. There was a 36 year gap between the US unveiling a fourth-generation jet fighter prototype and China following; 16 years for a nuclear submarine and just a year for reusable unmanned space planes. 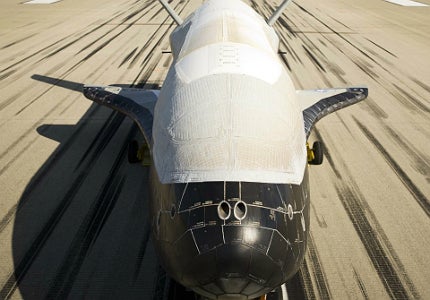 In November, Mark Gubrud, a postdoctoral research associate in the Program on Science and Global Security at Princeton University, told SPACE.com that he believed the USAF X-37B programme serves mainly as proof of American space power.

“Appropriately enough, Shenlong may also be little more than a symbol of China’s ability to challenge US assumptions of primacy and technological dominance,” he added.

So whatever missions may be found to occupy future generations of the X-37B OTV and the Shenlong space plane, healthy competition is at least keeping the space industry of both nations at the cutting edge. With luck, innovations developed to support each programme may rapidly filter down into military applications then benefit civilian life, just like during the first Space Race.