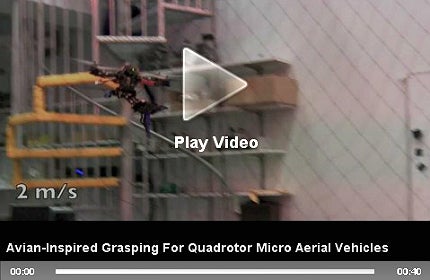 Emerging technology has often taken inspiration from nature. Having previously sought bird-like UAVs with flappable wings, could the US Air Force’s next step be an eagle-inspired grasping claw?

Scientists at the University of Pennsylvania’s GRASP lab have drawn from the predatory actions of an eagle to develop and equip a quadrotor UAV with a grasping claw. Working on the same principle of a bird of prey hunting for fish, the claw would enable a UAV to retrieve, transport and deploy payloads while maintaining a significant velocity.

Although not explicitly designed for military use, the potential for an MAV to quickly swoop and retrieve or deploy an object of interest, without endangering the vehicle, is one that is likely to pique the interest of the US Department of Defense, given its current propensity for drone missions.

Video analysis of birds of prey during their grasping phase was used to formulate grasping strategies, revealing that an eagle will sweep its legs and claws backwards during capture, reducing the relative velocity between its claws and the target. This allows the bird to achieve a near-zero relative velocity while grasping its target without slowing down, and produces a high rate of success in grasping the target. Any gripper fixed to the bottom of a UAV would, seemingly, have to operate in the same manner.

"Video analysis of birds of prey during their grasping phase was used to formulate grasping strategies."

The actual design of the gripper also posed several quandaries, in that it needed to be capable of latching onto targets at high speed and enable a quadrotor to perch, much like a regular bird of prey does, on various objects.

Having initially investigated a two-pronged fork design, the team concluded that a three-finger design would be considerably more appropriate. The three fingers are driven using a servo motor and conform to the object’s shape during the grasp, using high-friction rubber to improve grip.

Having ironed out the finer details of gripper design and approach planes – the angle at which the quadrotor approached the target, taking speed into consideration – the testbed gripper was attached to an Asctec Hummingbird quadrotor MAV, with a target weighing 27 grams suspended in mid air.

While moving at 2 m/s, the quadrotor successful grasped the target each of the five times it was tested, while the MAV was also able to successfully grasp the target at 3 m/s.

Having demonstrated that the concept design of a grasping system based on a bird of prey’s legs and claws can achieve success in retrieving items, scientists at the University of Pennsylvania have identified three directions for future work.

"The three fingers are driven using a servo motor and conform to the object’s shape during the grasp."

Visual servoing algorithms are to be incoporated to work instead of the Vicon motion capture system, with the aim of enabling a quadrotor to make in-flight corrections using data from its on-board camera.

With the concept of perching a quadrotor also beneficial, a way in which a MAV could autonomously detect candidate sites to perch and conduct controlled landings on is also to be investigated.

Capable of soaring at high altitudes for days on end, high altitude long endurance (HALE) UAVs have emerged to an enthusiastic reception given their vaunted surveillance capabilities.

Lockheed Martin has released a video showcasing highlights of its F-35 Lightning II Joint Strike Fighter (JSF) programme over the course of 2012, but order cuts and criticisms over the year suggest its glossy production values may not extend to the aircraft itself.