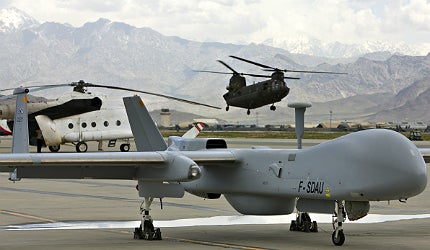 The armed services are increasingly dependent on the live streaming intelligence captured by unmanned aerial systems (UAS), especially from long-endurance high-altitude platforms (HAP). To achieve their full potential, the electrical systems that power the aircraft and transmit surveillance data must have a long and predictable duration.

This is also vital to prevent the systems running out of power over enemy territory and being captured with sensitive systems on board, or risking the lives of soldiers who must handle the landing and recharging of UAS when they come to earth.

With UAS and their electronic payloads forming a key part of its business, Cassidian is looking at innovative ways to manage power systems through a unique partnership. EADS Foundation Wales is a joint venture between the Welsh Government, EADS, Cassidian and Cardiff University, with funding split 50/50 between industry and the Welsh Government.

Gary Clayton, UK R&T manager with Cassidian, explains the drive behind the research.

"Heavy fuel presents a logistic challenge transporting it to the front line, so there is a drive towards all-electric aircraft, particularly the smaller ones and HAPs," he says. "The key is to make the power go as far as possible and harvest as much as you can. That first part is what we’re researching, so that you can stay on mission for longer, have less change-round of assets, and each UAS operation becomes much more cost and mission-effective."

"Electrical systems that power the aircraft and transmit surveillance data must have a long and predictable duration."

The first of the two programmes designed to achieve these aims, Tethys, is a £200,000 programme taking inspiration from the way hormones control the demand for energy when the body is in motion or at rest.

"Traditional power management for self-sufficient electrical power systems, airborne or otherwise says, I can turn that system on or off depending on whether I need it or not, " says Clayton.

"We are working with Aberystwyth University to look at the way the human body uses power. It is very good at slowing down unused functions – not turning them off, but putting them into a waiting state. The endocrine (hormone) system recognises when a body part needs a lot of energy and responds rapidly."

The researchers backed up some promising early simulation results with early stage experiments which have demonstrated a 30% power usage reduction. Due to the risk involved with tweaking the power consumption of an airborne system, the team is using a 12ft unmanned robot sailing vessel called Beagle.

"It has a rigid sail and rudders controlled by big servos, communication systems that are sending back data, and a water monitoring system acting as a payload – all the same sorts of systems you find in an aerial unmanned platform without having to go through the same airspace usage clearance procedure," says Clayton.

The team is also looking at balancing power use and demand between fuel cells and more traditional batteries.

"Fuel cells hold a lot of power but only give out a small milliwatt dribble over a long time," says Clayton. "A battery’s good for letting you have lots of power when you need it, but it runs out rapidly. We’ve done a lot of work on balancing that out and managing the systems on the electric aircraft so you use the fuel cell to run the aircraft and charge the battery when you’re drawing lower loads, meaning you’ve got lots of instantly-available energy for take-off."

The team is also investigating ways to reduce the power requirements of the communication systems that are vital for military UAS.

"As the RF transmitter signal in an electrical aircraft gets weaker it will ramp up the automatic gain control (AGC) to maintain a channel for a payload – this is the same way mobile phones work," says Clayton.

"The team is also investigating ways to reduce the power requirements of the communication systems that are vital for military UAS."

"But if the aircraft knows where it is and what it’s doing, it can determine whether a piece of data is immediately important or whether to refer to the flight plan and wait until it reaches a location where transmission will be easier and use less energy."

By understanding the complete mission as it applies to power management, the UAS could also automatically determine whether to engage the servos to respond to every gust of wind to stay accurately on the flight line, or make slow adjustments to gradually steer towards the destination.

"It’s about understanding the whole complexity of power management within the vehicle," says Clayton.

"Bringing that into a new type of mission management that understands what’s important and slowing things down where possible helps manage the power on the aircraft and achieve these significant results."

One of the biggest consumers of power on all-electric aircraft are communications systems, including 10W transmitters. Another Cassidian project, the £2.5m Dazzle programme, uses laser systems in a novel way to cut power use.

"Another Cassidian project, the £2.5m Dazzle programme, uses laser systems in a novel way to cut power use."

Dazzle aims to get around this by only using the ground light source, which can have a constant mains or generator power supply. The UAS modulates the signal through a retro reflector on the aircraft and uses smart tracking to send the signal back to the ground station.

"That means it’s now using tens of milliwatts rather than watts," says Clayton. "This will help increase the duration for all-electric high-altitude, pseudo satellite and unmanned tactical platforms."

The Tethys programme will run for at least another year in the R&T stage. At that point the team will hold a review and determine whether more research is needed in any areas, or whether it is ready to progress into the R&D stage.

"At the next stage of research we’re almost certainly going to put the technologies into an aerial platform," says Clayton. "We may take something like the Tracker mini-UAS tracker and strip all its systems apart to confirm that what we’ve done as a ‘proof of concept’ works in a representative environment."

With the potential to save energy not just for electronics onboard UAS and other military man-packed and portable equipment, but also for commercial technology such as mobile phones, Dazzle and Tethys could have far-reaching implications.

As Clayton says: "If you have to take the power with you, using it better allows you to do more with it."

The Zephyr family of solar-electric-powered unmanned air vehicles is being developed by QinetiQ in the UK with the UK Ministry of Defence, under a jointly funded programme.

The Phoenix battlefield surveillance, acquisition and targeting system provides real-time surveillance by day and by night.