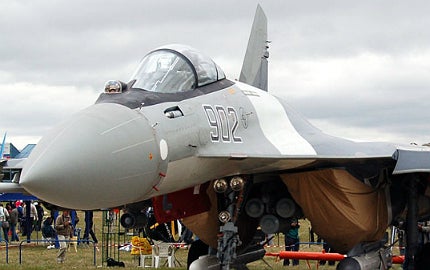 China’s Ministry of National Defense has signed a preliminary agreement with Russian arms exporter Rosoboronexport to acquire 24 Sukhoi Su-35BM multirole aircraft at a price of $1.5bn.

The contract, due to be signed in either 2013 or 2014, was discussed by Russian defence minister Sergey Shoygu and Chinese President Hu Jintao during a recent meeting in Beijing.

The deal comes months after a contract between the two nations for Su-35 aircraft was cancelled amid Russian claims that China had acquired and reverse engineered an Su-27SK aircraft, using it to create the Shenyang J-11B.

Designed by Sukhoi and manufactured by KNAPPO, Su-35BM is based on the Su-27 and was developed as an advanced capability air superiority fighter, to simultaneously engage multiple air targets using both guided and unguided missiles and weapon systems.

During the test, the interceptor travelled at speeds of 4.5 Mach and intercepted an incoming enemy ballistic missile, represented by a modified variant of the Prithvi surface-to-surface missile.

US to deploy key space surveillance systems in Australia

Scheduled to be operated from the Harold E. Holt Naval Communications Station at North West Cape in Western Australia, the C-band radar will deliver a critical dedicated sensor for the US Air Force’s (USAF) SSN, which is designed to detect, track and identify space debris.

The Space Surveillance Telescope is an advanced telescope which is capable of providing a wider field of view of space objects enabling detection and tracking of smaller objects present at the deep space altitudes in geosynchronous orbits.

Australia is currently selecting a site for the SST deployment and has also agreed to share its relocation and operational costs once operational.

Lockheed Martin delivered its contract proposal to the US Air Force for the development of a multistatic radar system designed to enhance the USAF’s ability to identify and track space debris.

The system, dubbed Space Fence, has already demonstrated its capabilities during prototype testing as part of an 18-month, $107m Space Fence prototype contract awarded to both Lockheed and Raytheon in January 2011.

Space Fence is an advanced ground-based radar designed to replace the existing USAF space surveillance system, known as VHF Fence, which was originally installed in 1961.

Israel’s Ministry of Defence successfully tested an upgraded version of the Iron Dome anti-rocket defence system, just weeks before rocket attacks from Gaza escalated amid tensions in the region.

As Russia announced arms deals with Iraq and India, the US Air Force revealed the fate of its X-51A Waverider programme.